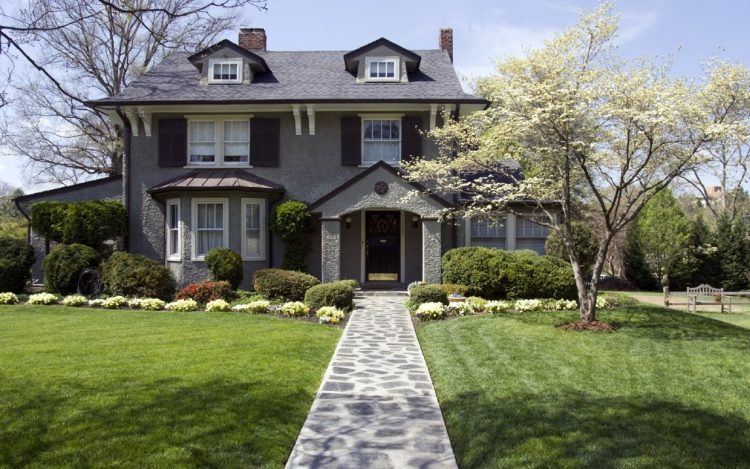 Generally speaking, homeowners want their homes to have as much curb appeal as possible. In part, this is because curb appeal can make a home seem that much more hospitable, which in turn, can make it a more pleasant place to live in. However, it should also be noted that curb appeal increases a home’s value on the local real estate market by creating positive impressions on potential home buyers, which should be an important consideration for most homeowners. Regardless, curb appeal is important, but a lot of homeowners are hesitant to make much of an effort because they are under the impression that it costs a fair amount of money, which is not true.

Here are 10 ways to increase curb appeal without spending money:

Most people like it when ornamentation is arranged in a symmetrical fashion because it provides their surroundings with a powerful sense of organization, which can make a home seem more presentable to interested individuals. Better still, creating symmetry can be either as simple or as complicated as the homeowner desire because there is such an enormous number of ways by which to do so. For example, something as simple as flanking the front door with a pair of chairs, which should involve nothing more than a small amount of time and effort to move them.

On a related note, asymmetry can be useful for creating curb appeal as well, though it should be used in moderation because too much asymmetry results in nothing more than a chaotic and confused mess. Used in the right manner, an asymmetrical element can either highlight something that deserves more attention or distract people from deficiencies, which is particularly useful because creating asymmetry is just as simple as creating a sense of symmetry.

Homeowners who have a set of outdoor furniture can use it to create a guest space with minimal time and effort. In short, put out a small table and then flank it with a pair of chairs, but make sure to angle the chairs towards the table so that there is a sense of a separate space. Having such a space is useful, but it is even more interesting because it can make a home seem cozier to potential home buyers, which is much more valuable than it sounds.

A well-maintained lawn is one of the critical components of a home’s exterior because it makes it seem like it is in excellent condition. In contrast, an unkempt lawn will highlight the flaws of a home, thus making it look damaged and dilapidated. Fortunately, even the simplest lawn can contribute to this effect so long as it receives the mowing and other maintenance that it needs to look its best.

Putting some ornamentation on a mailbox can do a great deal to express the personality of the homeowner, which in turn, has a great deal of influence on the personality of the home as a whole. Such ornamentation does not have to be complicated since even hand-crafted items can serve well in this regard. However, people who are unsure about decorating their mailboxes have another option in the form of giving their mailboxes a fresh coat of paint for a bright and vibrant appearance.

Flowers are a low-cost method for providing a landscape with some color. Better still, they can be a low-maintenance method as well because there are numerous flowers that are not just bright and beautiful but also capable of thriving under tough circumstances. As a result, homeowners should not hesitate to make use of flowers in their landscaping so long as they are prepared to put in the time and effort needed to care for them.

With that said, a lot of flowers bloom for no more than a short period of time, but their beauty can be preserved through various methods, thus extending their usefulness to the homeowner. After all, flowers that have been transformed into wreathes and other ornamental items can provide a touch of color to a much wider range of settings than their planted counterparts, meaning that people who are skilled with their hands have another tool for enhancing their curb appeal at their disposal.

Lighting might be subtle, but it is also powerful. After all, it can be used to not just highlight select portions of the landscape but also make it safer and more secure by making it possible for people to see what is there and what is not there. Changing the lighting can be as simple as moving some lamps from their previous positions, but people who are willing to spend a little should know that buying more lighting should not be that much more expensive.

Creating the sense of a pathway from the sidewalk to the front door can impose order on an otherwise uncontrolled landscape. Furthermore, it is a chance to focus care and attention on a select portion of the landscape before encouraging visitors to focus on said portion rather than the rest of the property, meaning that it can maximize the benefits received from the time and effort invested into it. Best of all, creating the sense of a pathway can be simple as lining an existing path with lights to show where people should be headed.

Finally, the simplest and most straightforward method for increasing a home’s curb appeal without spending money is to clean it on a regular basis. In part, this is because a clean exterior enables a home to look its best, which is important for making the right impression. However, it should also be noted that a clean exterior takes longer to deteriorate, thus extending the useful lifespans of the surfaces in question. For people who want to keep their exteriors clean but struggle to make the commitment, they should strive to clean less each time but clean more frequently so that they will not become frustrated with the process.