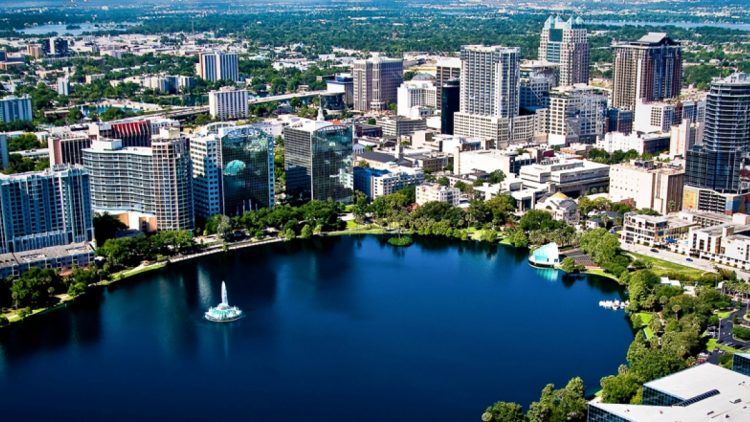 Orlando is sometimes considered the jewel in Florida’s crown. Walt Disney knew just what he was doing when he scouted out land that was 40 minutes from Cocoa Beach to build his East Coast empire. Orlando has it all–strange urban legends and wacky characters intertwined in a city of sun and fun. Orlando is also one of the destination points of the famous “I-4 Dead Zone”, a highway built over a Native American burial ground.

As it is a tourist region that hosts millions of travelers each year heading over to Disney’s and Universal’s theme parks plus Sea World and other attractions, some just decide to stay near “The Happiest Place on Earth” and become Orlando residents full time. According to the 2014 Census, Orlando has a population of of 254,000. With all of these folks living in “The City Beautiful” as it’s called, there are bound to be some strange ads on Craigslist Orlando.

Here are some of the most outstandingly strange pick of the crazy Craigslist crop of ads from this eclectic city in the Sunshine State. 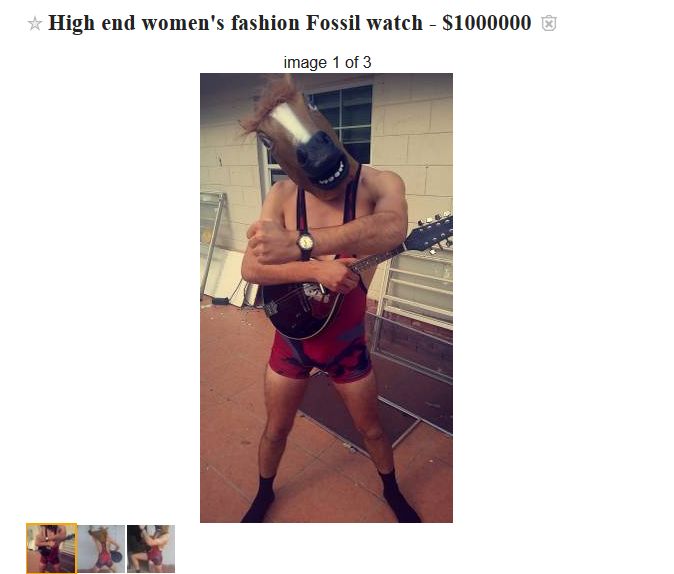 What better way to sell a wristwatch than choose a scary dude wearing an equine mask and short shorts holding a guitar to model it? This ad, High end women’s fashion Fossil watch – $1000000, http://orlando.craigslist.org/jwl/5647076935.html, has no period in the price so one can guess if it’s going for one thousand dollars or one million bucks–it’s not clear until the end where it specifies that it is going for one million. What is crystal clear is that this man loves wearing this watch while modeling his horse hipster ensemble. The poster adds that “Selling spoils of enchanted journey, good karma is sure to follow this watch. Definitely not cursed or haunted in any way, comes with 1 out of 3 chance to win local lottery.” and that it’s made with “advanced E.T. technology”.

The poster of this business opportunity ad could use some space, particularly between the “a” and “part” of this ad asking if you Want to be apart of your child’s life? https://orlando.craigslist.org/cls/5685173845.html. The spelling challenged author of this ad uses guilt tactics to make dads feel bad about missing their child’s important events due to working. The offer says that “I WANT to make sure he sees his father and I in the stands!” Whether they are pertaining to his or her son, or your son, it’s not clear.. But you can make five to ten thousand per month from home. so you can truly be “apart’ of your child’s life, perhaps with your home office door closed making that big money.

3. Kids Can Drive You Nuts 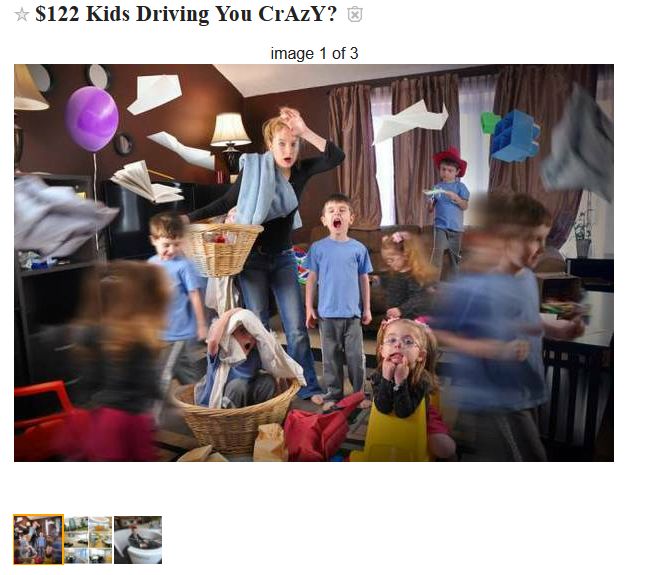 This ad asks the rhetorical question, $122 Kids Driving You CrAzY?, http://orlando.craigslist.org/off/5671440451.html. The strangest part is the accompanying photo showing a mom recoiling in horror as her kids are literally everywhere around her wrecking havoc. The product being advertised is a virtual office or office assistant. 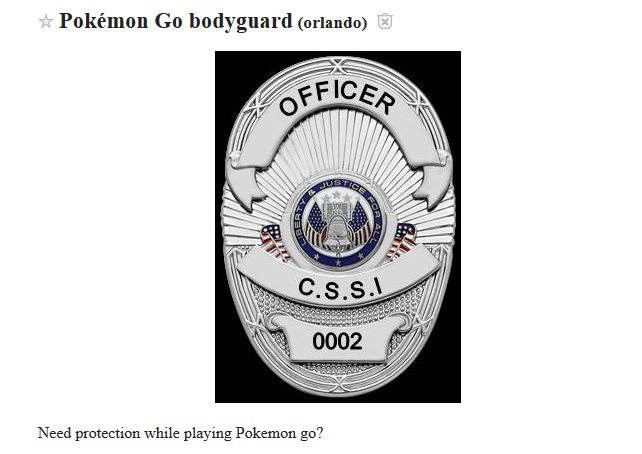 Pokemon Go! can be a rough game and you sometimes need that extra security knowing you have a Pokemon Go Bodyguard, https://orlando.craigslist.org/sks/5691139905.html,  on your side. The bodyguard has a badge to show and promises “We can provide armed bodyguards while you focus on the game.”

In this Craigslist Orlando ad gleaned from The Best of Craigslist, http://www.craigslist.org/about/best/orl/1483621873.html, someone needed some holiday cash and was wiling to put his soul up for grabs. The title is Human Soul (black friday special), and the poster is willing to trade it for holiday gifts for his family. The ad states that “you could use it to trade the devil for fame or riches (keep in mind that you don’t have to give him your own soul), you could use it as a doormat you could give it away as a gift or resell it the options are endless!” 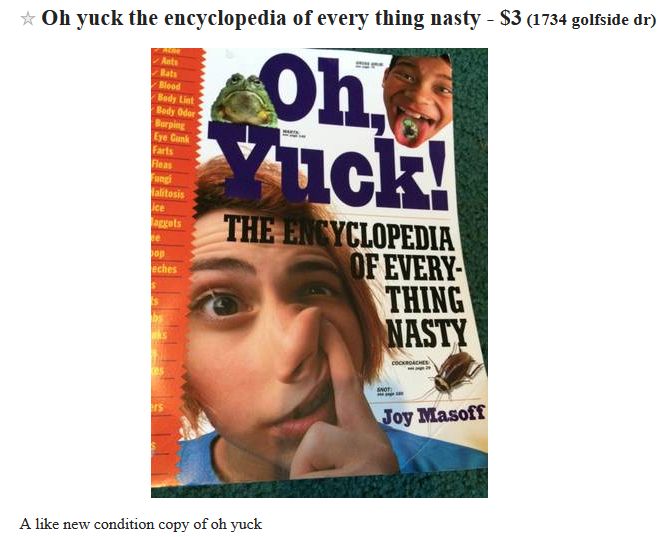 If the photo of a guy picking his nose on the cover doesn’t get you, the title of this book surely will. Oh yuck the encyclopedia of every thing nasty, http://orlando.craigslist.org/bks/5657657078.html, is in “like new” condition and is going for only $3.

7. One Way to Tackle Unwanted Odor 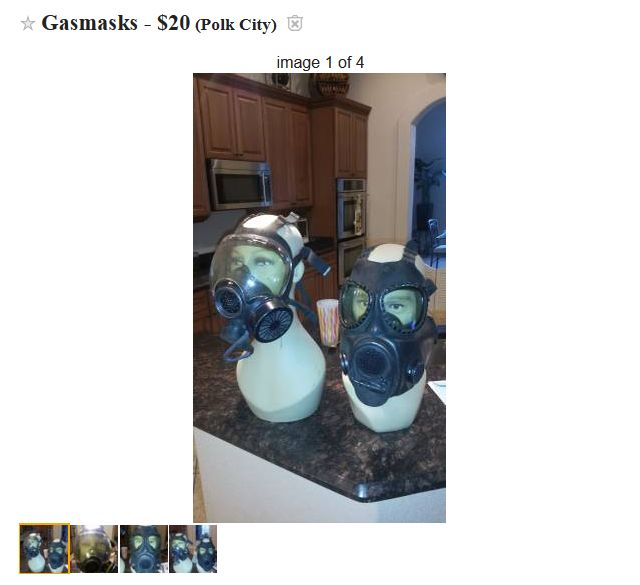 The poster claims that “Halloween is Coming” so what better item to have handy than Gasmasks, http://orlando.craigslist.org/for/5682968951.html.. According to the seller these are “the real deal” and “you can drink through them.” The strangest part of the ad is the dummy heads modeling the items. 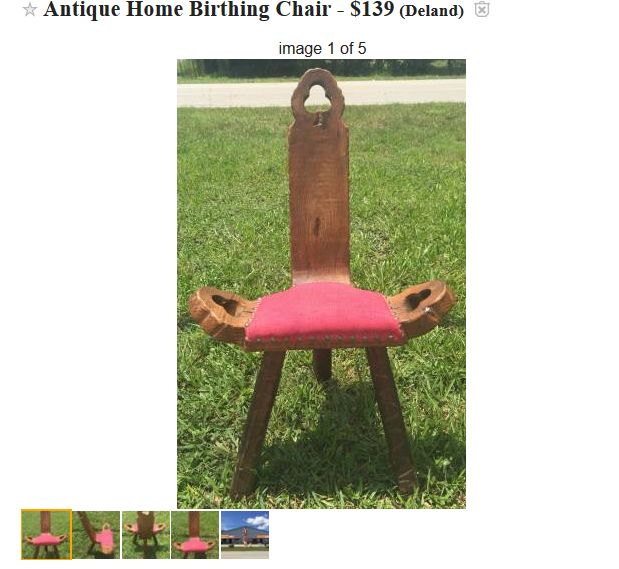 In the Antiques section of Craigslist Orlando a seller has a wooden Antique Home Birthing Chair, http://orlando.craigslist.org/atd/5671548303.html. Not only does it look as hand crafted as the seller states, but it also appears extremely uncomfortable, but it comes with the original cushion that looks well worn as if it’s been through a few deliveries. According to the seller it is a “Really cool old piece”

9. Prepare With A Family Plot

This seller says ” I advise who ever reads this ad prepare yourself and your family for those horrible times. GD Bless you”. It is a Double cemetary plot for sale, http://orlando.craigslist.org/for/5690285800.html. as the seller is moving out of state. It’s going for $4,800. There were other ads as well for plots in the area, including one in a Catholic cemetery. If you are single, no problem, as you can buy a Single One Person Crypt in Outside Mausoleum – $7000 http://orlando.craigslist.org/for/5681221255.html, which is on the “heart/touch” level so its the best area for visitors to feel close to you.

10. A Part of American History 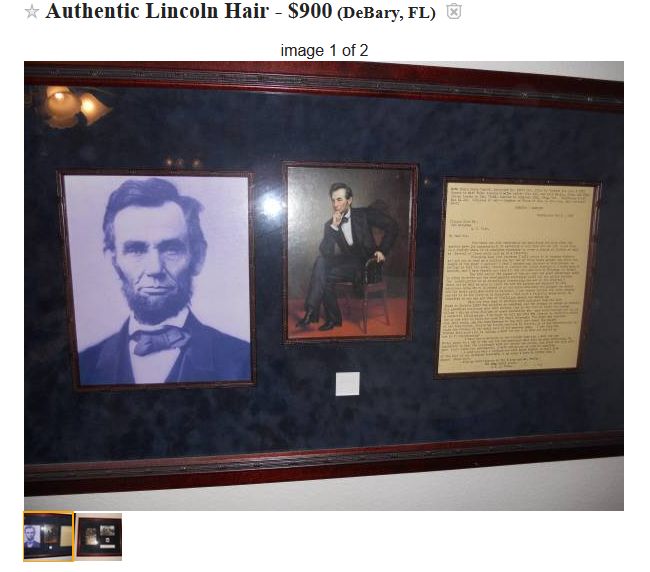 This seller has some of President Abraham Lincoln’s hair to sell, Authentic Lincoln Hair, http://orlando.craigslist.org/clt/5680993446.html. It is matted in a display case for those who want a personal memento of Honest Abe. It was purchased “Christies Auction House in New York” for $3,000 – sell for $900 OBO. Also have matching display piece of black ribbon off his coffin.” The seller has “full documentation” that this is really Lincoln’s hair. The ad does not state how the seller got that piece of coffin ribbon.