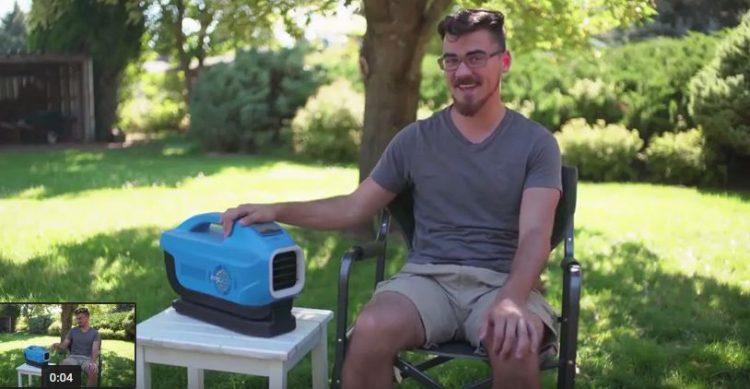 The Zero Breeze company is a self funded business going through Kickstarter to fund the production of a new and innovative product that we think is going to be a smashing success. Their Zero Breeze unit is the worlds first portable smart, multi-functional air conditioner. It is versatile and features additional capabilities including a night light, a smart phone charging station and it also functions as a bluetooth speaker. This remarkable unit is definitely an all in one that has some amazing features. You an pre-order yours and become a part of the funding.

More about the Zero Breeze company

There isn’t a lot that is currently known about the company, other than the founder is named Kelvin and the company is based out of San Francisco. It is a startup company that is in the initial stages of devcelopment. Kelvin and his team of developers and marketers have been working on the design of two prototype models for the past two years. In order to fund this project, they combined forces with the kickstarter programs to get the financial backing that is necessary to begin production.

What is Zero Breeze?

It is a multi-functional and revolutionary portable air conditioning unit. It is designed for taking along on camping trips, to work sites and on any type of excursion or activity that may expose you to extremely warm temperatures. It can be used with electrical power or battery for added convenience. It is the first rotary powered portable AC unit on the market, well, almost on the market. The additional benefits of the

Zero Breeze are that it also functions as a night light, bluetooth speaker and smart phone charging station. It helps to increase comfort wherever you go. It uses rotary compression along with advanced refrigeration technology with a green function that is not harmful to the environment. It is believed to have the potential for lowering room temperatures to 44.6 degrees F which is quite remarkable. The battery life is designed to last for approximately five hours before needing a recharge.

The combination of devices which are frequently needed on excursions makes this unit even more of a convenience. It condenses what would be space for three separate items into one space saving unit. It is lightweight for easy carrying, coming in at around fourteen pounds.

Backers of the Zero Breeze

The company has had fairly good success with pre-orders coming in left and right. They have met one hundred and forty seven percent of the original one hundred thousand dollar goal for funding and it only took them two days. With an additional forty three days left in the funding campaign, it looks as though their production funding is on schedule, at least with the needed financial resources.

Zero Breeze is offering pre-ordering specials to continue the fund raising campaign. They are offering $150 off of the proposed retail price for anyone who wants to place their order now. There are a variety of bundle packages available and units are already being reserved in decent quantities. The price will go up if you wait too long.

The molding, tooling and manufacturing timelines are not laid out as well for Zero Breeze as they are with many other Kickstarter campaigns, but we’re told that they are on schedule with the molding, tooling and manufacturing deadlines so far. They give an approximate shipment date to backers of as early as March of 2017. Some backers have registered complaints about the lengthy wait process and feel some uncertainty about the odds of the company reaching goals and delivering on their pre-orders. There is no solid indication that there is a problem as of yet. Anyone that provides backing for a crowdfunded startup is taking somewhat of a risk, but the benefits can be immense if the company is able to follow through on their timelines and commitments. The retail price is set to be $349.00.

The future of Zero Breeze

At their current stage of development, what we know is that the company has two prototype models which have been tested and are working as planned. They have set financial and pledge goals to establish a large initial production run in order to meet the demands of all pre-order agreements and those which are expected to come rolling in after the official product launch. Financial support is still needed to make this happen in accordance with their goals. According to their commentaries, more funding is needed to come up with innovations and solutions for reducing production costs so the units are both affordable for consumers and for the manufacturers.

The future of the company is tough to gauge at this point. The product sounds like an amazing and versatile multi-functional unit and if it works as described, it is believed that it could well become one of the hottest selling items to hit the market in some time. We’ll know more about the outlook on the future of Zero Breeze after the product makes its official launch, hopefully on time with its March 2017 schedule. Delays in production and shipping of pre-orders could be a negative form of publicity that this new company does not need. The sincere hope of all is that they will reach their goals and make all of their deadlines.

It would be extremely beneficial for the Zero Breeze company to supply a little more in depth information about the company, its history and the people who are responsible for the various departments. A more detailed production schedule along with some perspective about the developers, their experience and all of the attributes that they bring to the table would help to boost investor confidence in the company.

Overall, this sounds like an amazing new invention and we’re truly looking forward to hearing more about their successes and the reviews that consumers give them after the lauch date. We’re keeping our fingers crossed for this new product that could transform the way we enjoy the great outdoors.