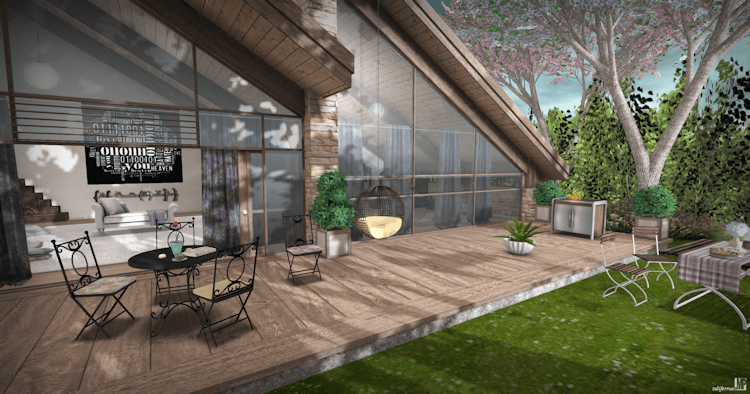 In online games such as Second Life, players choose an avatar which becomes their second self, so users can exist as their avatar in a virtual world. In this cyber universe, players can make new friends, fall in love, and buy or sell nearly anything they can create. Transactions are commonly paid in Lindens, a currency named after Linden lab, the software development company that started Second Life with just a tiny island in the middle of cyberspace.

Other virtual universes use bit coin, and other web online payment systems that have real world value. This web money can be cashed in at online currency stations, like ATM’s. Like real life, the value of the Lindens and Bit coins rise and fall, but the standard exchange rate for Lindens, the most popular virtual transaction payment, is about 250 Lindens per US Dollar.

In 2005, Linden Labs open sourced their programming code, yet Second Life remains the most popular online universe. Online living communities provide the technology for users to create structures using basic design blocks known as “primatives”. Those who have a flair for design can create their dream mansion, or buy one from one of the many real estate developers in the community. 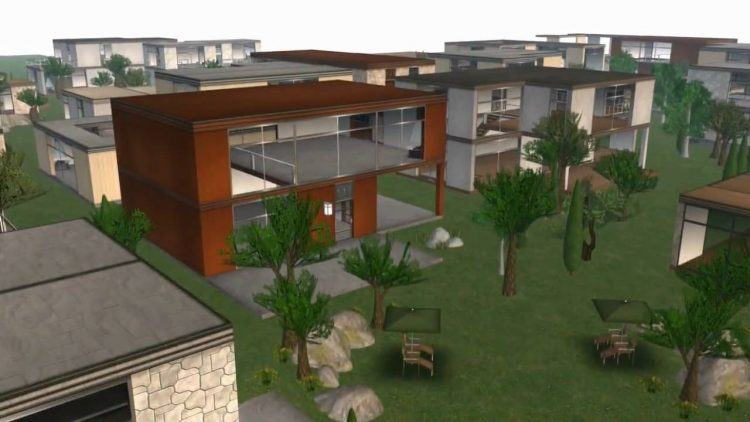 Virtual World platforms are also an adulterer’s paradise. Illicit web romances blossom like fake 3 dimensional flowers, and many of these virtual lovers are looking for a simulated love nest. Its not only couples who want virtual homes, some adults, who live in crowded quarters in real life want rooms of their own in a customized virtual property. Most virtual real estate is relatively cheap to rent, but considering the imaginary land is just made up of source code, its relatively easy for Internet land barons to buy, develop and sell. Owners do pay an additional land use fee; however, this is peanuts compared to what they can make in transactions. You can put audio streams in your land or change the weather, or any other exterior condition for ultimate curb appeal.

Land is plotted in a color coded virtual world map, much like Google Earth, so you know who owns what private sim island, or what’s available on the mainland, where the rest of the poorer folks live. Some land was originally put there by the Lindens, called “government land” at 1 Linden dollar per square meter of land. This land is where your Linden bought with your premium membership is placed. If you want to buy larger portion of private land , you have to upgrade your membership. The beauty of buying a large sim is that you can carve it up and rent each piece, like squares on a monopoly game.

Some virtual investors, particularly the ones who got into the game before the market got crowded, have grown their online real estate holdings into a full-time job. A video about an enterprising couple shown on YouTube which originally aired on CNN Money, highlights a couple who in 2005, quit their day jobs to manage their growing stable of beach front properties.

They bought islands called Sims at $295 per island, split them up into exclusive beachfront land parcels, built some condos, and rent each of them out for a considerable monthly profit of about $24 per week each. Their virtual land business grew so big, they had to hire avatar real estate agents and property managers to help them run their empire. The real people behind the avatars made a 10% commission on each deal. The real world job losses of the last decade hasn’t hurt their business, they claim that more people are at sitting at home with nothing to do, so that just fuels their Second Life beachside getaway business.

Renting out virtual beachfront condos is one way of doing business; however, the real money is made in sales of cyber properties. Asri Falcone, who in real life is Teasa Copprue. was featured in the documentary film Life 2.0. Asri and her real life alter ego have carved out a five figure income designing and selling fully furnished luxury properties, as well as a high fashion line in her boutiques. In reality, Teasa is prettier than her avatar, but does not have Asri’s tiny wasp waistline.

A former graphic designer, and avid gamer, she found the best of both worlds in her lucrative business. Teasa lives in her parent’s basement, and seemingly in her pajamas, for up to 20 hours per day. She spends her earnings that don’t go back into her business, to help support her family. Some basic homes come free with a Second Life Premium membership, however, if you want a custom home designed by another it costs more–sometimes much more. The Second Life Marketplace is chock full of homes built on other’s properties to rent, or perhaps you can buy them outright from the owners. If you need a tutorial on how to buy virtual land, check out this YouTube video.

You can sell more than just homes in cyberspace. Forbes.com reported in 2010 that a man named Jon Jacobs sold a virtual space station nightclub, Club Neverdie, that he built and managed in the Entropia Universe for $650,000, netting a half million profit.  Jacobs originally took out a mortgage on his real life house to buy the entire asteroid, which features not only Club Neverdie, but has a biodome, shopping center and other attractions. . This investment and sale was made exclusively with Project Entropia Dollars, or PED, as it’s called in the Entropia world. He’s going to invest some his sales profit to pay a staff of designers, who are busy creating new planets where Jacobs can strike more real estate gold.

Coming in second for large real estate deals is Erik “Buzz” Lightyear, a fellow Entropia entreprenur who bought The Crystal Palace Space Station for $330,000 in 2009.

In communities like Second Life, there is no score to beat and the game is never over–as long as the person behind the keyboard stays alive to pay their premium fees, or doesn’t give up their avatar to join the real world again.