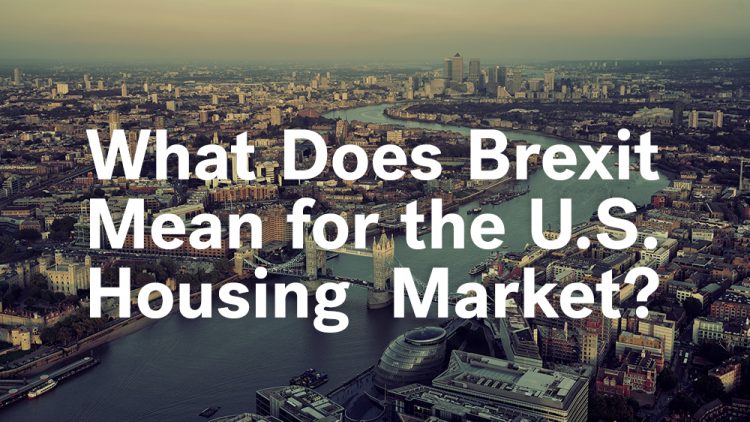 Back in June, following the United Kingdom’s decision to leave the European Union, experts were predicting a major migration of London’s financial sector to mainland Europe and the United States. As of October 2016, it hasn’t happened. While the predictions of a shock wave reverberating throughout the global markets came true, it lasted two days — immediately following the vote. Many economists also speculated there would be a flight to U.S. real estate as a haven for investment capital, but so far that has yet to materialize as well. U.S. housing markets remain unaffected after Brexit.

“We gave it a couple of months and looked at the results in September,” said Senior Director of Research Susan Persin of the financial analysis firm Trepp, in an interview with Bisnow. “We looked at data from our respective companies to determine if all the rumors going around were true and basically determined the data is not yet showing an impact on U.S. real estate markets.”

With the dust settling globally, Brexit seems to have left the U.S. housing sector unaffected—for now. Even as major west coast regions like the San Francisco Bay Area are experiencing some of the hottest real estate markets they’ve ever seen, there is little evidence of investment capital migrating to the U.S. from Great Britain. By all accounts, the U.S. economy seems to have shrugged off Brexit and charged straight ahead.

On the other hand, the Federal Reserve scrapped its 2015 plan to implement four interest rate hikes over the course of 2016, partially as a result of the vote. The most recent change has been an increase to .50 percent in December of 2015. Whether we’ll see another one before the end of the year remains uncertain, Of course, for U.S. investors, this is a good thing, as borrowing costs remain low.

How all of this will play out in the long term is still anybody’s guess. Demand for residential property in the U.K. actually rose in September and housing prices there are appreciating again after taking a bit of a hit following the vote. Traditionally, this has been a key indicator of the overall health of the British economy. Over the past 30 years, whenever United Kingdom housing prices have declined, there has been a commensurate decrease in household spending. With prices on the rise again, if the pattern holds true, so will spending.

Still, we’re a couple of years away from completion of the exit process, which was slowed by the resignation of former Prime Minister David Cameron following the referendum. For now, U.S. housing markets remain unaffected after Brexit. However, the truly lasting effects of the decision will only make themselves apparent once all is said and done. Until then, we’ll just have to wait and see.