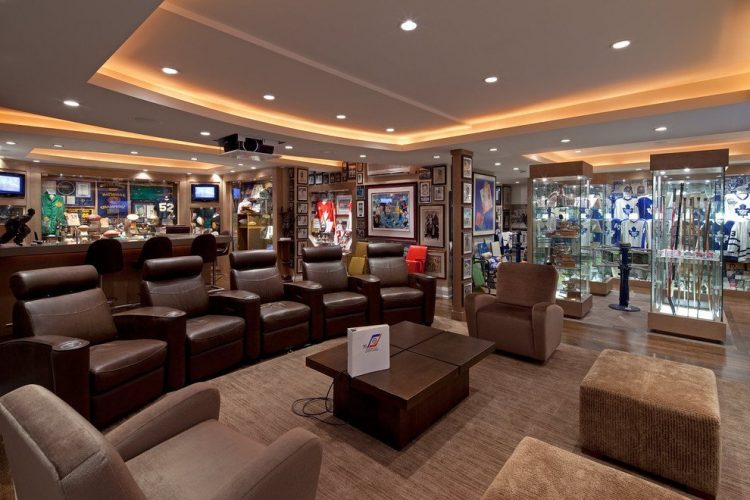 A man cave could be something such as a basement with furnishings that include video games, a pool table, and of course a massive TV.  In some cases, multiple televisions.  Still, for other man cave connoisseurs, it could be a place as simple as a garage or just a room or part of the home that is separated from everything else and off-limits to the kids and wives. It’s a place where you can put on your headphones and find yourself by escaping the world and all of its stress for a brief moment in time.

So, what group of guys are under a great deal of stress and in need of a major man cave escape? Well, it shouldn’t be surprising to find out that professional athletes whose stressful careers have made them millions in income have man caves that are bigger, better and nicer than the majority of our homes. Impressive man caves allow celebrities to enjoy their opulent lifestyles comfortably while never worrying about any problems outside of their home.

So, here are the stories of 10 incredible man caves owned by famous athletes:

NFL player for the Denver Broncos, Sylvester Williams, has one of those enviable man caves. He hosted a Thanksgiving Day dinner at his home and FOX Sports shot a video there to show fans exactly why this guy would never want to leave his man cave and head over to one of his relatives’ houses for any holiday. For starters, he has a number of video screens as well as a massive aquarium. In addition, his man cave even has a fully stocked bar complete with a bartender. And, for any guests who aren’t into watching sports on any one of those big screens, they can play arcade games or billiards instead. It’s all a testament to Williams’ success at going from working at Wal-Mart and Taco Bell to playing in the biggest games ever in pro football.

Junior is undoubtedly the most famous NASCAR driver ever. OK, many may think that he’s the second in that category behind his late father, whose famous footsteps Junior is definitely following in. But, either way, he is definitely the most popular driver in the sport and has one of the biggest and wildest man caves ever. It’s located on his 200-acre estate in Mooresville, NC that he named “Dirty Mo Acres”. His man cave is actually not a cave at all, but an entire western town called Whisky River, which includes a livery stable, Hilton hotel, the U.S. Marshal Jailhouse, Slim Pickens Mercantile, (named after the famous beloved cowboy actor), and the Silverado Saloon. Guests have included Junior Johnson, Carl Edwards, Mark Martin, and Paul Menard, just to name a few, as well as herds of life-size plastic bears, buffalo, deer, and horses. He even has a life-size Forrest Gump who sits on a bench on top of a hill that overlooks the house that he built for his mother. Forrest himself was a gift from his sister. Other gifts from family and friends include a pair of live buffalo named Laverne and Shirley, as well as two longhorns.

Although Junior may be the most popular driver in NASCAR, his friend Jimmie Johnson is arguably among the most wildly successful NASCAR drivers ever. He even won the championship five years in a row. So, of course, he has to have one of the most awesome man caves around. His man cave is a massive 13,000 square feet with a number of toys, including, a driving simulator, a full bar, a golf simulator, pool tables, dart boards, and a poker table. He even has recliners and bar stools that are motorized. His man cave bar is an actual antique bar salvaged from an old Pennsylvania hotel.

As a tight end with the Minnesota Vikings with an amazing five-year contract that included a $6.5 million signing bonus and a guarantee of $18.5 million, Kyle Rudolph certainly has the where-with-all to build an awesome man cave. After all, his NFL deal could result in Kyle earning $36 million + overall. So, he bought a beautiful Minneapolis area home in 2015 and decorated his man cave with NFL jerseys. He added a pool table, a theater with a big screen television, as well as padded recliners that connect to the audio system for an immersive experience. Video game systems are also a part of his man cave’s theater because Kyle feels that having to play “Madden” on a regular size TV would be just plain dull. Well, there’s definitely nothing dull about his pricey man cave.

Denver Broncos player Von Miller’s man cave is affectionately referred to as Club 58 by his friends. It features a pool table, a semicircle bar, and an aquarium filled with fish that he has actually named. Teammate Emmanuel Sanders described the basement man cave as quite impressive and sick even with games, poker, and a pretty cool bar.

Superstar Cleveland Cavaliers player LeBron James’ 30,000 square foot Ohio dream home has its own theater as well as a bowling alley. His man cave also contains a game room and a sports bar. Add to that big screen televisions, a fully equipped studio, and a pool room, and it would appear that the great Mr. James has just about everything he could possibly need in his man cave.

Golf great Jordan Spieth just could end up having the most fantastic man cave on the PGA Tour. After winning both the U.S. Open and the Masters in 2015, reports say that he earned a cool annual income of $53 million and he’s only 22! Having already bought a $2 million home, he then bought another one for $7.1 million that was already complete with an amazing man cave built by the former owner, another professional golfer named Hunter Mahan. The man cave features a golf simulator and a fully equipped gym plus a basketball court beneath his 12-car garage. He’s currently working on making it even more amazing and fans can’t wait to see what he does with it.

This famous former L.A. Lakers player has been just as successful in other areas as he was on-the-court as an NBA player. He has actually earned in excess of $100 million from selling Starbucks franchises and some of his Lakers stock, according to Forbes magazine. He also holds stock in the Dodgers, the L.A. Football Club, and the L.A. Sparks. So, with all that money, he would of course just have to have an amazing man cave to chill out in. But actually, Magic’s man cave is more like a museum. He has an entire trophy wall, a hardwood court with the Lakers logo painted on the floor, a display of all of his championship rings, and so much more.

Floyd Mayweather’s retirement from professional boxing has given him more time to post pictures on Instagram of his amazing Las Vegas mansion for his many followers to see. He calls it Big Boy Mansion and it’s proof positive that Floyd will never be mistaken for someone who is in any way humble. In fact, his entire mansion is just a huge man cave. Besides his many never-driven sports cars worth a cool $15 million, he even has video game consoles with touch-screens on the kitchen counters. He also has a theater with two levels and stacked movie screens. In addition, he has a Fendi chandelier, as well as a closet-full of cash. As the highest paid athlete of 2015, that kind of makes sense.

Harrington’s Dublin home shows what a fan he is of all kinds of games. His man cave features an arcade room full of games from yesteryear, like a Pac-Man console, Space Invaders, and a Star Wars pinball machine, just to name a few. And, for more exercise, it also includes table tennis with an automatic serve function. Those who prefer leisurely games can relax and play some billiards or practice their swing on the golf simulator. In addition, he has an adjacent gym for storing his awards and golfing gear.