It’s no secret that Florida is home to some of the most bizarre behavior in the country (if not the world), so you may have already imagined that Craigslist Gainesville would be full os some very interesting things. After all, Craigslist everywhere is known for some pretty bizarre posts, and it’s starting to seem like there are more trolls on the site than people who are actually trying to buy and sell things.  If you’ve ever spent any time on the site you’ve probably witnessed first hand the type of things that go on there. Well, although you may have experienced your fair share of weird while browsing through the classifieds, these people and their listings definitely take the cake. Here are 5 posts you won’t believe from Craigslist Gainesville.

Ok, we might have to cut Gainesville some slack, seeing as how this post came up as being “nearby.” But that doesn’t change the fact that looking for a boyfriend on Craigslist probably isn’t a good idea. With this list of qualifications, she might have a hard time finding Mr. Right, as most people on Craigslist aren’t on there in search of their soul mate. Hopefully she finds true love, but she may want to site up for a dating site instead.

Big boy looking for a partner 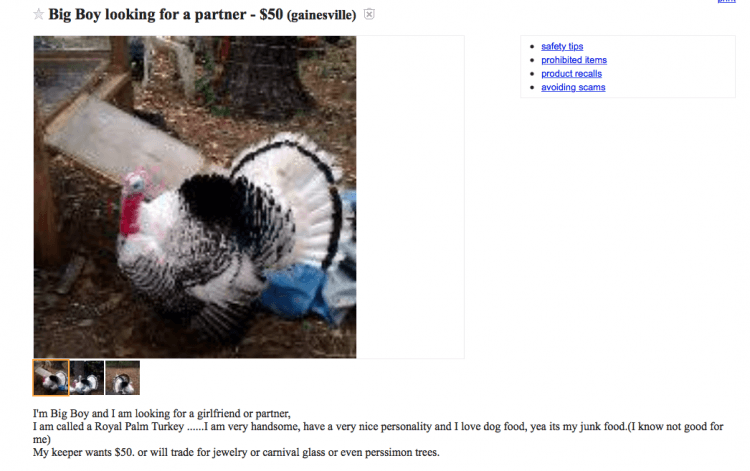 Judging by the title of this post, you probably thought you’d stumped across another poor soul hoping to find a relationship. Well this is the perfect example of why you should  never judge a book by its cover, or in this case, an ad by its title. Apparently, this jive turkey is looking for a “partner” and his owner is willing to make some pretty hefty trades to get one. Well, I guess that all depends on what your definition of hefty is… 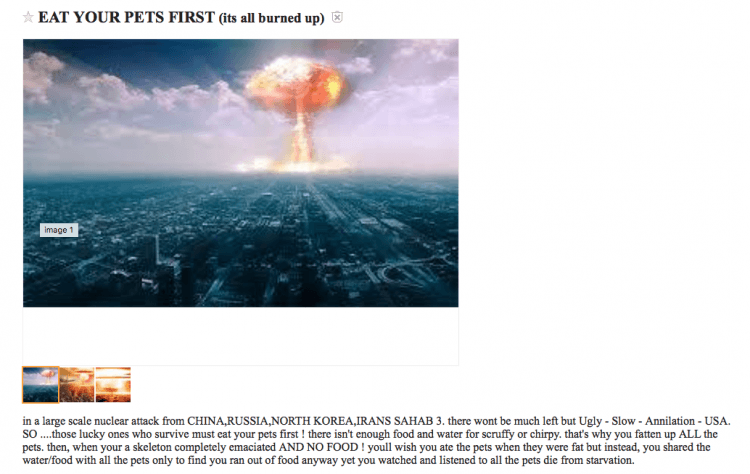 This is yet another listing that came from “nearby” Gainesville. Although we’ve already established that judging an ad by its title isn’t always the way to go, there is an exception to every rule. Apparently, this person has some very strong thoughts on the future, and while he/she may think that eating pets is an unavoidable solution, it’s safe to say that the average person would find this method more than extreme. Hopefully, no one takes this advice seriously, because, well, that would be gross.

If there’s one thing you can count on Craigslist Gainesville for, it’s a littler entertainment. You’d think by now that people would know that trying to meet people on Craigslist isn’t the best or safest idea. But apparently, somebody probably should have informed this guy that Craigslist is the last place to go if you’re looking for a normal person. Sure, it’s kind of sad that his friends “bailed” on him, but he’d probably be a lot better off trying to find some old high school classmates on Facebook than he will be trying to find a friend on Craigslist.

If you’ve ever wondered where broken hearts go, the answer is finally here: Craigslist. Unfortunately for this person, they seem to have misplaced their heart, and the chances of them finding it are getting slimmer and slimmer. Unfortunately for this person, no one on Craigslist has probably seen their heart, and instead, they’ve just opened themselves up to getting a bunch of weird emails from complete strangers.