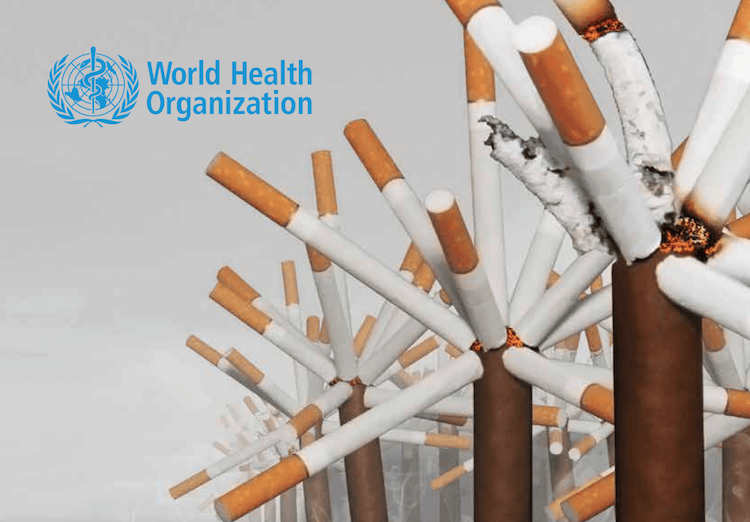 When you think of air pollution, the first things that may come to mind are aerosol cans and car exhaust, but there’s an underlying cause—one that most of us don’t even think of—and it’s cigarettes. In all stages of manufacturing, packaging, and especially, consumption, cigarettes are the largest contributor to non-biodegradable waste.

It isn’t just the use of tobacco and cigarettes. The WHO writes that tobacco is the biggest source of litter on the planet. In 2012, smokers lit up 6.25 trillion cigarettes.

Secondhand smoke accounts for the death of one million citizens, annually, and 28% of those fatalities are children. That’s enough children to fill nearly 570 elementary schools.

Cigarettes also contribute to non-biodegradable waste, topping Styrofoam products and disposable aluminum products. Apart from killing seven million people every year through firsthand smoke, we all become subject to thirdhand smoke pollution. It’s a term that most people don’t even know; it’s about how cigarette waste poisons the planet.

A startling 67% of cigarettes end up in landfills and other earth-contact areas and poison the soil. Apart from just that, they contain arsenic, which is quickly released from the cigarette butts when rain strikes, washing hazardous materials into our water supplies. You’ll still see men and women flicking the ends of their cigarettes on the ground; nobody seems to care.

Other waste includes the packaging of cigarettes: foil, paper, glue, and ink that all end up in trash heaps. In total, there are over two millions tons of waste in these fields, all from cigarettes.

On an annual basis, tobacco is the cause for 6.2 million tons of wood to be burned. When you break down the math and look at the process of drying tobacco leaves, which almost always include wood burning. The forest is shrinking due to tobacco farmers and their operations. We’re losing immense amounts of trees, as well as kissing particular plant species goodbye—all thanks to tobacco.

Producers use 11.4 million metric tons of wood to cure or dry the tobacco leaf. Manufacturers use one tree to produce 300 cigarettes, which equates to about 1.5 cartons.

Effects on the Lower Class

While lung cancer continues to rise despite the steady decline in cigarette consumption, most of the statistics surrounding it pertain solely to the lower-class, or impoverished people. America isn’t the only nation with a tobacco problem; companies like India, China and Brazil lead the world in tobacco growth; China has the highest percentage of cigarette smokers than any other country.

The tobacco industry has an enormous amount of power. Not only does it bring in over $270 billion just in tobacco taxes across the globe, but their industry makes trillions, globally. With such a driving force behind tobacco, is there an end in sight?

Manufacturers market tobacco products such as cigarettes, chewing tobacco and cigars mostly to poor people, those who live close to poverty, and minorities. With low levels of income, vices are synonymous, and the cheaper they are, the better.

Tobacco needs the poor just as much as the poor believe they need to smoke. Their selling point is to give stress-relief and comfort, but the impact on our planet is anything but comforting.

Can We Escape The Smoke?

The WHO has called for increasing the tax on cigarettes across the globe to drastically reduce the number of smokers. Through a fixed price, no matter what jurisdiction or territory, it would come down to the poor either making rent, or smoking.