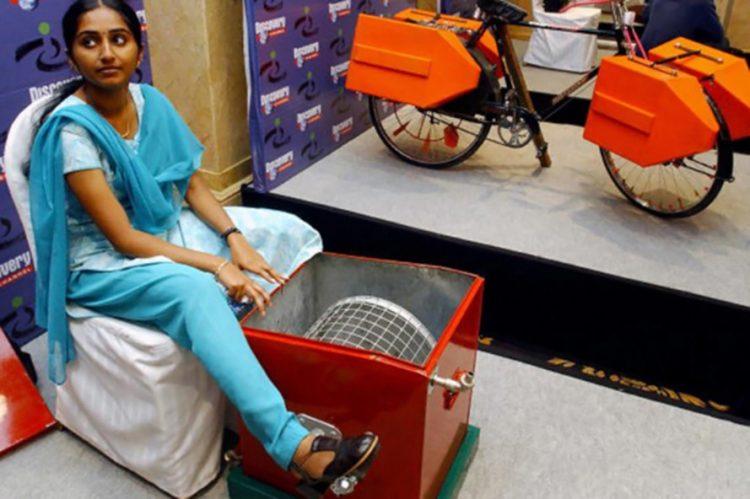 When families fall on hard times, there are two ways to go. Some just lament and get frustrated about what they don”t have, and some conquer life’s challenges with hard work and ingenuity. When 14-year-old Remya Jose’s mother fell ill, the job of doing the family laundry was up to she and her sister. They didn’t have a fancy electric washer, so instead of just being upset about their lack of an appliance—she designed one. Her pedal operated washing machine uses no electricity and is powered by foot pedaling alone.

Ms. Jose demonstrates how this marvelous machine works in a YouTube Discovery Channel video. It looks like a big box but has a spinning agitator inside. You simply fill it with water, add soap, put the clothes in the spinner basket and pedal away! The inner cylinder makes plenty of suds and it has built in drain spigot.

This Pedal Powered Laundry Machine gets clothes sparkling clean and gives you a good workout to boot. One feels inspired watching this pretty, positive and oh so smart young lady demonstrating how well her invention works. It works just like an electric washer–it moves, it soaks, it spins, and drains just like a machine using hundreds of dollars of electric power each year.

The story of a woman who invented a “green” washing machine at only 14-years-old is as interesting as the product itself. Living in India, she had to take three buses each way just to get to school. With mom’s medical bills mounting and her father undergoing treatments for cancer, she and her sister had the challenge of cleaning the family laundry without an electric machine. So on her school vacation, instead of whining having to do without like many girls her age would have, she went to work inventing her own clever design. She saved her family lots of cash, and put herself in a growing crowd of teenage inventors.

In the video she notes that the machine is noisy, but she quotes her teacher who reminded her that “The big bang was noisy too!” If you think about how much noise the most expensive machine makes, adding a little noise on laundry day is well worth the savings.

Her idea is the inspiration for young people worldwide, as demonstrated in a reading lesson for children entitled “Remya Jose’s Great Idea.” by Sunita Apte. Clearly, this story about a girl who had no washing machine, and lived in a remote village without expensive and scarce electricity, has motivated other children to see how they can use science and simple building technology to make things.

It’s not just a washer, it’s also a great exercise machine.  If you want to start getting in shape while tackling one of the most dreaded household chores, The Pedal Powered Laundry Machine is the way to go. It saves energy, and uses human energy so it’s a win-win situation for humans and the environment. 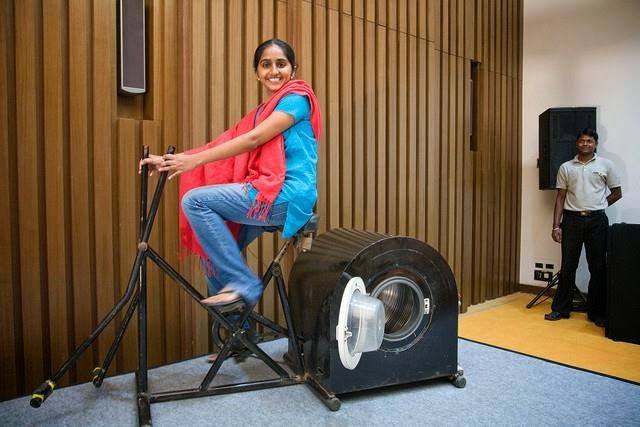 Children living in highly technology wired countries take for granted things like washing machines and other appliances. When our society thinks of creating something, we think of coding or finding an app. With nothing but raw materials and no computer assistance, Remya Jose was able to manufacture her machine from scratch. She planned it herself,and won an award. The National Award was presented to her by former Indian President Abdul Kalam.

She also made a feminist statement which is unsual for young girls in India. According to AP Archive, Remya did ask her father for an electric washer. He said no as Remya’s father thought Remya and her sister should learn the traditional way of washing clothes. He was preparing her in case she got married and lived in an area without power, which was not a far fetched assumption, as many areas in India do not have power. The traditional way of washing clothes in India is using a stone and rubbing and scrubbing clothes until they are clean. With her long commute to school and many other chores to do, Remya decided on an alternate plan. She viewed schematic plans of an automatic washer and made her own plans and her amazed dad took her design diagram to Indian firm Pandikkad Industries and they made it according to the diagram.

“In rural areas, it can be more useful. Also I think the main use is that with an ordinary electric machine, electric power is needed and also only one force cleans the clothes – the spinning motion of water. But here I use two forces – one is the spinning motion of water and the second is the beating effect. I think the second one is more effective. And also the cab inside the horizontal cylinder is giving protection to the clothes.”

Remya is also gaining fans of the green lifestyle. Her invention is featured on Green Optimistic.com, which notes how teenage inventors are improving our world.

Remya Jose is now 23 years old. She has gone on to make more useful inventions and now holds a position at The National Innovation Foundation in Ahmedabad. With more and more individuals wanting to live a healthy lifestyle and reduce their carbon footprint, many are going back to hand-cranked or washboard type laundry devices.

Her story is important for two reasons: The first is to encourage girls from all over the world more involved in math and science, and to enter traditionally male dominated fields such as inventing and engineering. To find out more about the STEM Initiative for girls (Science Technology, Engineering, Math) visit PBS. org,

Secondly, her invention challenges our notion that we would be lost without electricity and shows how those without electrical connections in third world countries, and those who wish to live “off the grid,” can substitute automatic appliances with mechanical devices.