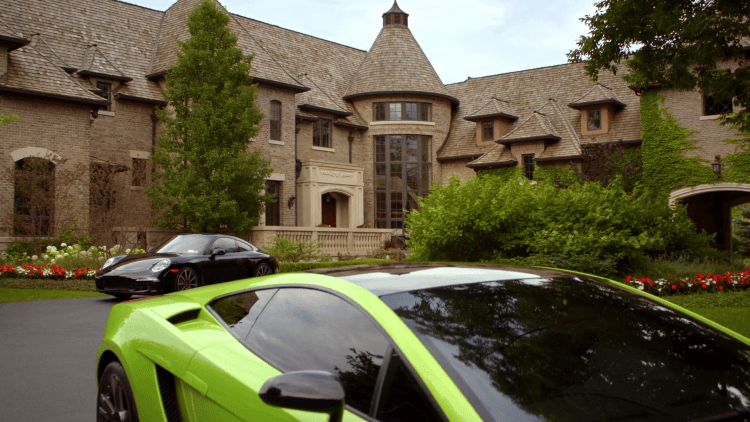 Stepping into Luscious Lyon’s mansion form hit show Empire gives fans an inkling about how power couples like Beyonce and Jay-Z must be living. Watching the Lyons sip out of Waterford flutes screams nouveau riche but who cares? It’s television. The character Cookie Lyon (actress and Emmy Award winner Taraji P. Henson) once deemed Lucious’ decor “tacky” and to some extent it is. The glam from the double front door to the Gaston walnut wing back accent chairs in ivory themed living room are almost too much. Lamps with crystal bases and the chrome accented chairs in the living room provide bling galore. A conference room table that mirrors the room, the mantelpiece clock, and geometric color block granite fireplace paired with tiffany style lamps with gold shades are impressive.

Here are twenty things you might not know about the Empire mansion: 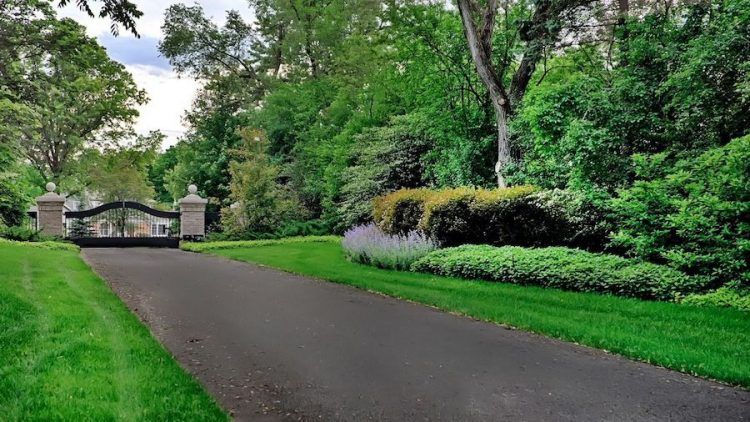 1. The actual address of the mansion used for most filming is 45 Lakeview Lane, Barrington, IL. Barrington is a northwestern suburb of Chicago, a long way from the show’s New York City setting. The homes in this area range from $2 million for a cozy villa to estates selling $18 million or more. 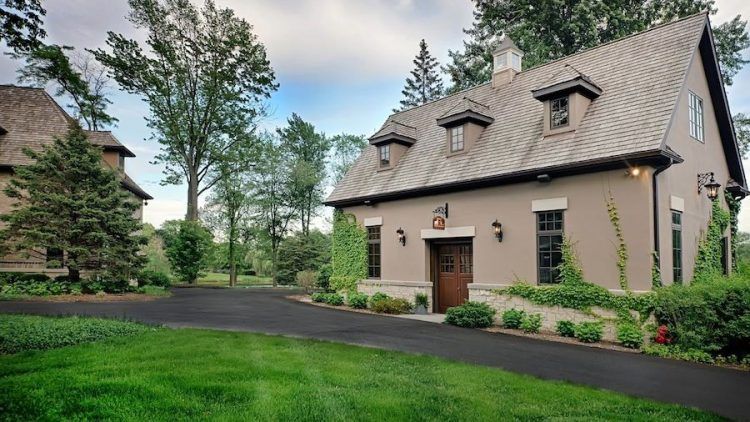 2. The property has been on the market since 2013, the asking price then was $15.9 million. In 2015 owner Sam Cecola lowered the price to a more affordable $13 million. Cecola is also the owner of the very popular Admiral Theater strip club in Albany Park, Illinois. At one time he also owned the notorious Club Paradise strip club in Las Vegas. 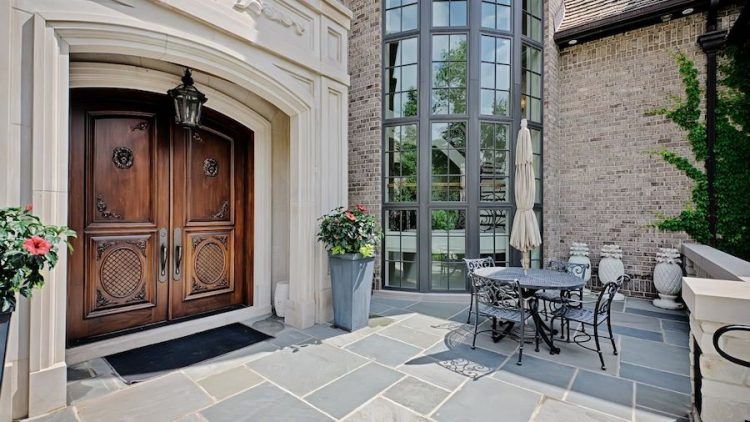 3. The listing agent is Melissa Govedarica of Sergio and Banks Real Estate, a division of Sergio and Banks Enterprises. Grace Sergio, whose husband and partner is James Banks, is known as the go to realtor in “Chicagoland”. The company is involved in every facet of high end accommodations including development, rentals and financing. 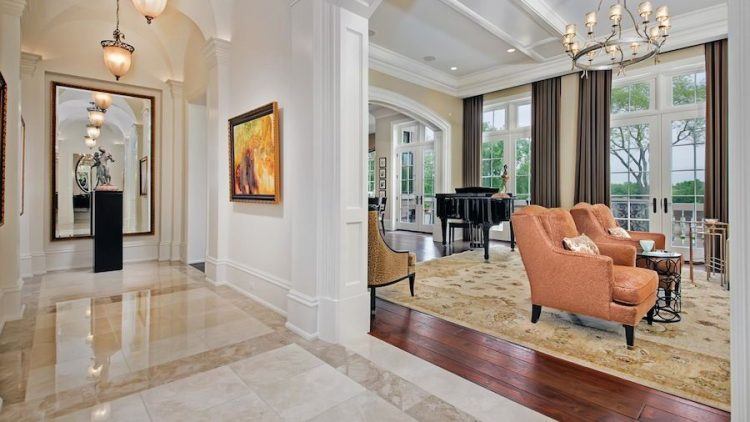 4. Cecola and his wife purchased the property in 2003 for $1.1 million. The house was completed to their exact specifications five years later in 2008. The long building process is said to be directly related to the huge amount of custom woodwork and ornamentation the couple demanded throughout the house. There are 5 luxurious bedrooms, nine bathrooms, and 2 half-baths. 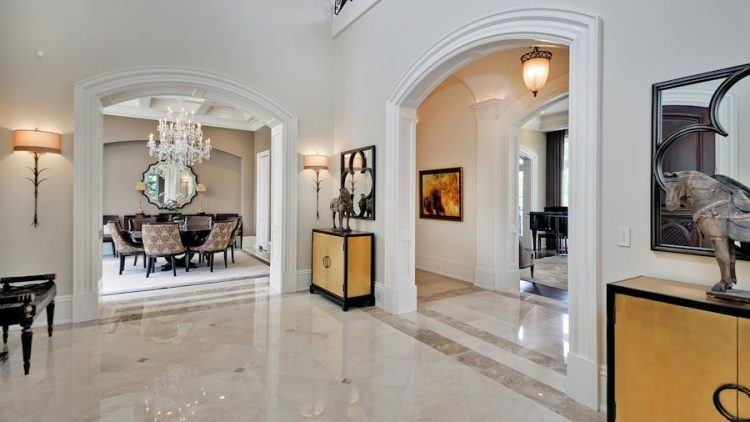 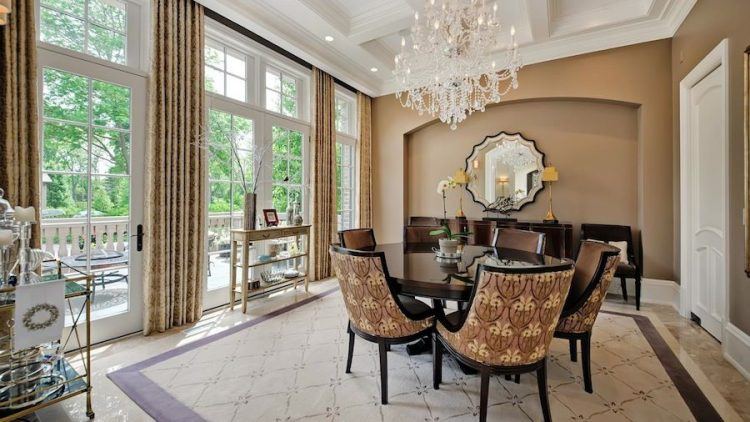 6. Lucious, en famille, fit right into the Barrington style. The median household incomes are in the high six figures, the population is less than 11,000 and the area is 100% sburban. Most of the residents are in their 40’s and a few maintain horses on their properties.

7. The Lyon mansion is set between two lakes on eight-plus acres of land. The location has breathtaking waterfront views, a wide crushed stone driveway, and slate sidewalks. There’s a gated entryway. Is it that for aesthetics or protection from Lyon’s many enemies? Outside are a requisite swimming pool and an immaculate dog run that are not part of the television show sets. Also there’s an outdoor fireplace, and a pond. The dog run has auto feeders and auto water. The gorgeous pool has a chic, user friendly changing room. A six car garage connects to the dog run. 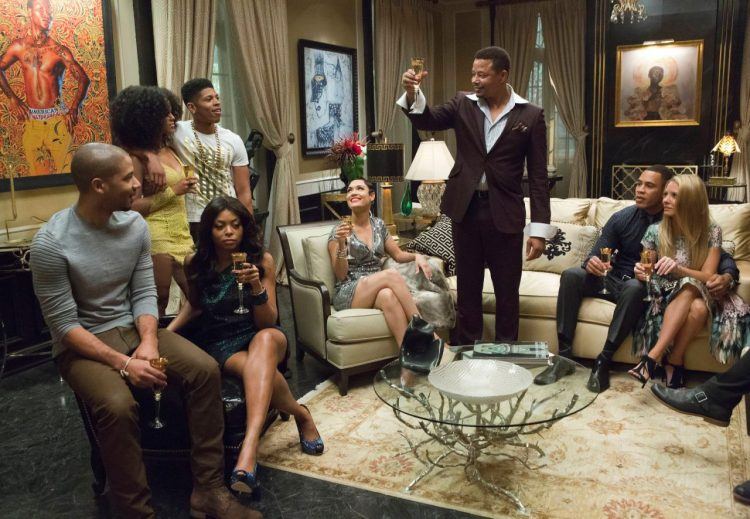 8. Inside the estate are fabulous amenities such as an elevator, the exquisitely detailed iron railing of the grand staircase, and the marble floored open entryway leading to the dining room on one side or the music room in the other direction. The second floor landing of the house is immense with artwork suitable for a collector like Lucious, a delicate, graceful chandelier and wall sconces for lighting perfection. A high tech, built-in system keeps everything secure. A porte-cochere (in real life it’s a guest cottage) keeps Lyon and his guests covered and protected from the weather from the time they step out of their luxury vehicles until they reach the entrance. 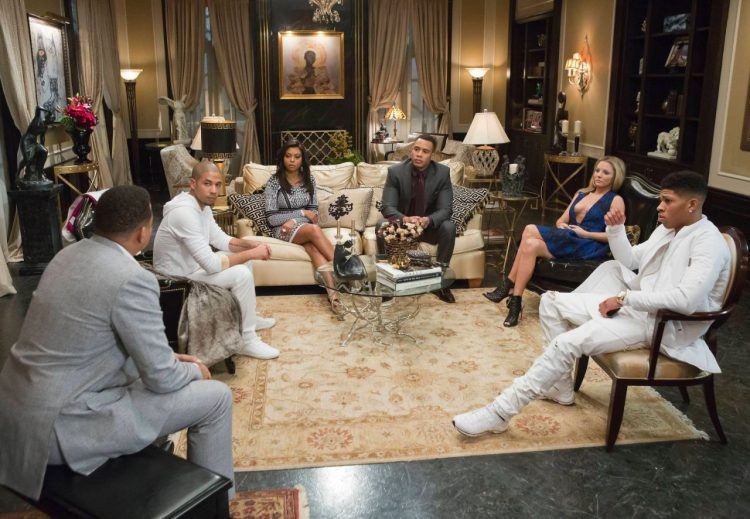 9. Some floors appear to be either oak, maple or some exotic wood; polished marble is used in the public areas. Custom-made rugs add to the overall lushness of this 21st century castle. Almost every room has a beautiful fireplace. 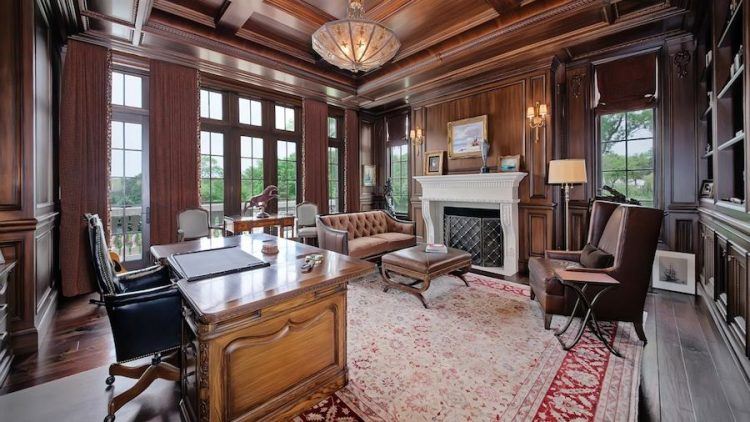 10. The Lyons have a massive amount of space for living and entertaining. Vaulted ceilings complete the wide open design and sparkling chandeliers light the way to this luxe life. Lucious’ exercise room has all the best equipment and plenty of TV’s on display. The house has both a wet bar and a full bar that opens out to the terrace and lower levels of the garden. 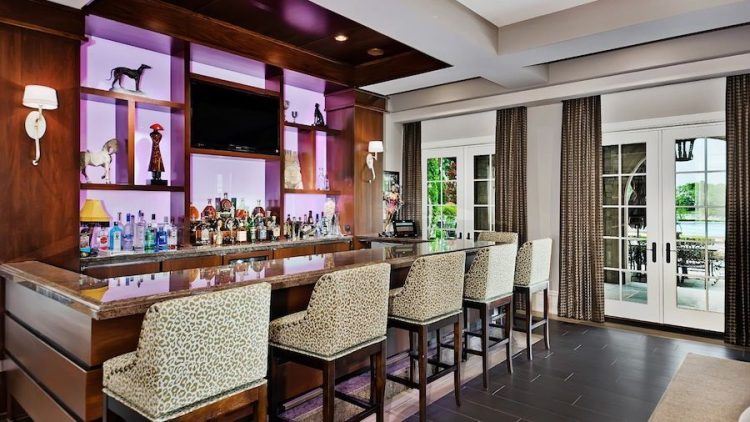 11. The full bar has a club vibe. The animal print bar stools add a subtle risqué touch, and are said to be similar to those in the Admiral Theater strip club. The bar itself is so polished it could be used as a mirror. There are eight stools for a cozy, casual ambience and the view of a lake through the French doors enhances the experience. 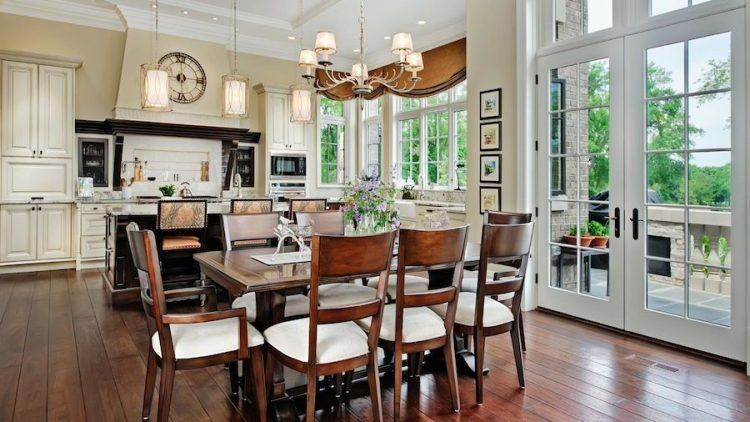 12. The bar itself was built with a Vegas flavor, without a trace of tackiness. The backlit shelves, the assortment of alcohol choices, and party atmosphere oozes good times. Unnamed sources swear there’s not a strippers pole anywhere in the dwelling. 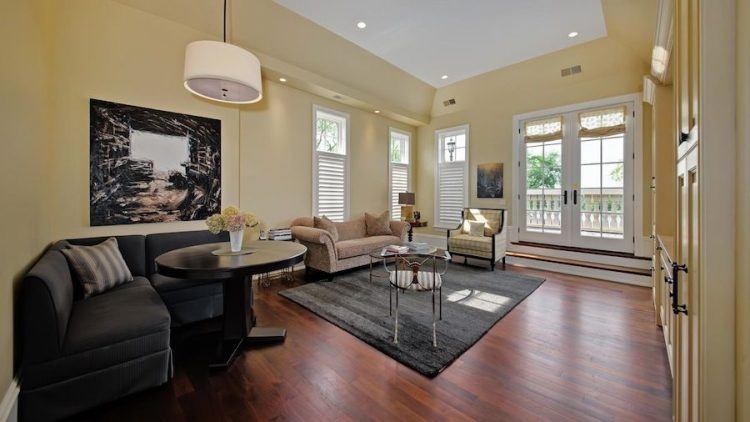 13. The simple, elegant double front door is the original, chosen by the Cecolas. This entrance appears around 75 inches wide and 85 or so inches high. The details again highlight their fascination with woodworking. 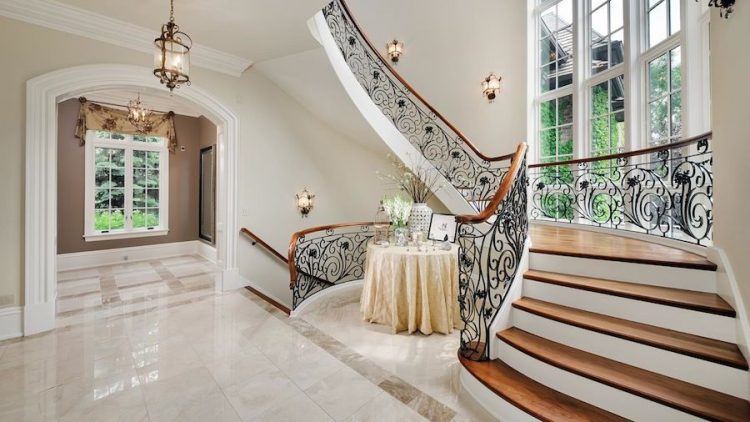 14. The set designers have darkened the mansion for a sinister, more complicated effect. Some of the additions and changes were used to give rooms a definitive masculine look. The scenes in the home office in early episodes were filmed using the original furniture and curtains. However, changes to the room are noticeable in later episodes. 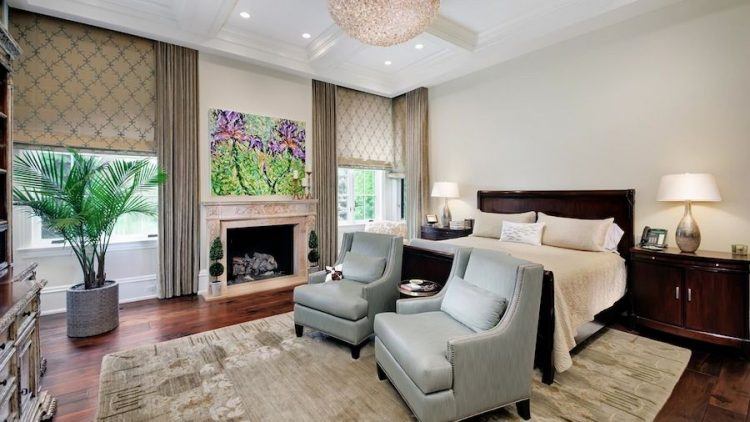 15. The show does not use props or computer-generated imagery (CGI), that’s real furniture in every room. Casual and formal living rooms are incorporated in the spacious house. Oh, to live the life of a music mogul. 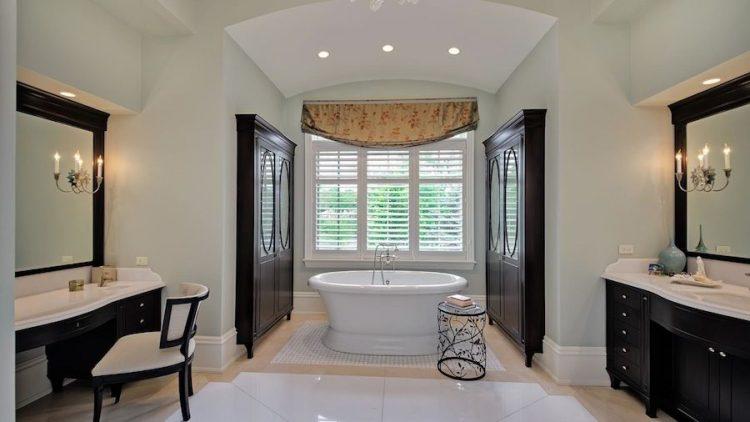 16. Producer, director, and writer Lee Daniels commissioned some of the art on the set including works by recent art school graduates. The three dimensional acrylic sculptures were created by Terrance Howard himself. The show’s artwork is a mix of Andy Warhol, Monet, Van Gogh and African American artists, Walter Lobyn Hamilton and Mickalene Thomas. In some scenes viewers catch a glimpse of a portrait of the late rapper Biggie Smalls. 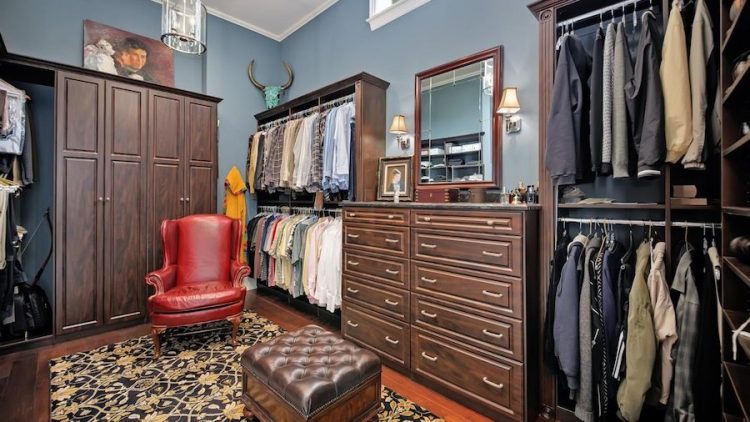 17. The huge gourmet kitchen is a standard mansion feature. Viewers have not seen it often, but it is huge. In the mansion’s kitchen there’s room for eight at the table and three at the island. Nearby, the “$40,000” dining room table that Lucious is so proud of is actually a well-designed copy of the original. The show’s kitchen has a darker wood floor and an archway leads to the living room. 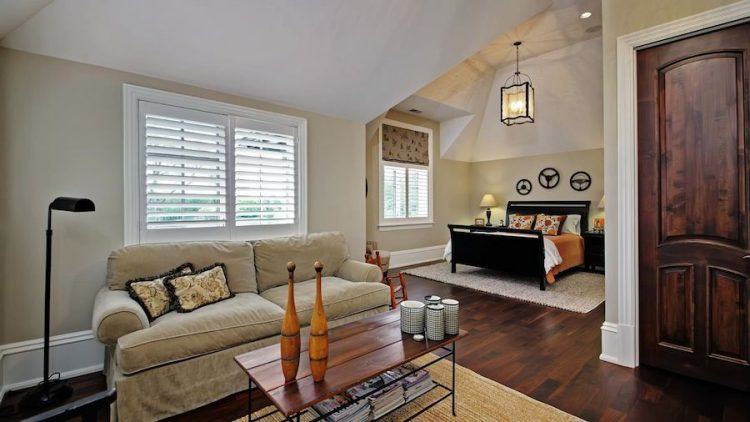 18. There is a prep kitchen that the audience will probably never see, unless Luscious decides to hide a body in the extra-large refrigerator. This area looks like a small apartment with its sand colored marble floor and all the appliances and acruments any master chef could possibly want. 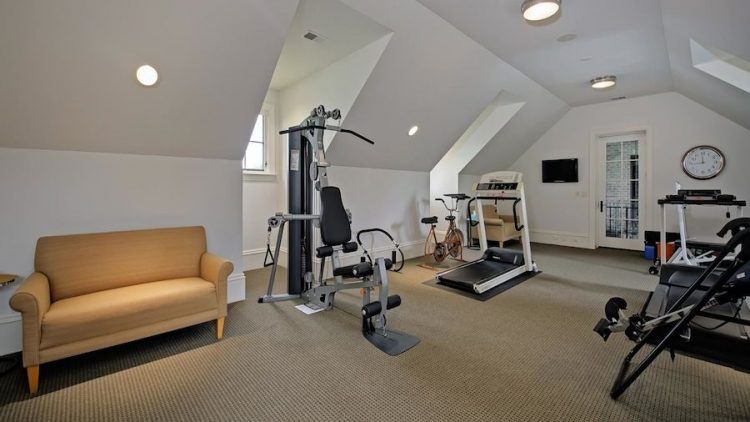 19. The master bathroom looks like a lavish, 5 Star hotel powder room with a tub. The mirrored seating area and the vanity that is size and design of a dresser are classy. And one wall is a window, providing lots of natural light while you bathe. 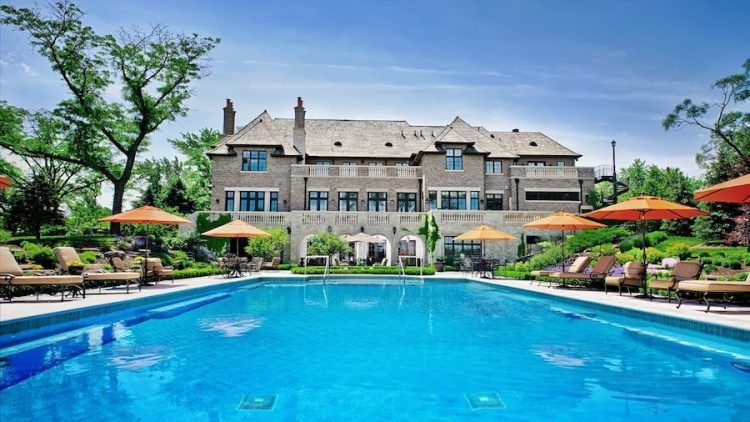 20. All the bedrooms are suites with chairs, desks, and comfy loveseats or full sofas. The master bedroom has a walk-in closet that is probably the same size as the smallest bedroom. There are 2 dressers, various cabinets and hanging options along every wall in the closet. A red leather chair and brown ottoman are included, just in case Mr. Lyon gets fatigued while trying to decide what to wear. The closet even has an accent rug.

All things considered, love the mansion or hate it, absolutely no one can deny its impressiveness. Several online sites claim to help you buy Empire’s furniture and accessories so your home can look like the one on the show. As if!