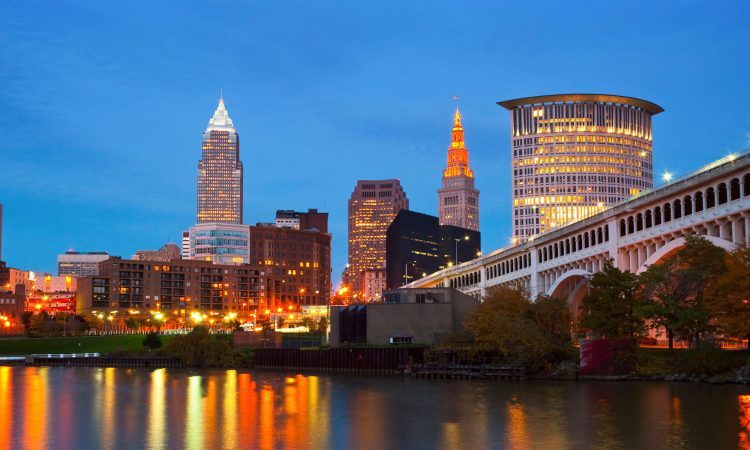 Cleveland, Ohio was named after General Moses Cleaveland of the Revolutionary War, who helped fund the land survey project of this Ohio territory. A mistake by cartographers misspelled the name of the city so it was thereafter known as Cleveland. Rocker Ian Hunter put this Ohio City on the music map when “Cleveland Rocks” became a 1979 hit, and later the song had a revival as the spirited opening theme for the Drew Carey Show. Cleveland has a rich history and impressive landmarks including The Christmas Story House, the home used for the outside shooting which is now decorated inside and out to match the movie set. Cleveland is baseball, windy walks through famous markets, and the founding home of famous companies like Sherwin-Williams and Office Max.

From a census of only three residents in 1800, this metropolis has grown to a whopping 396,815 in 2015, according to Suburbanstats.org.  However with the growth of so many inhabitants and visitors, there’s also bound to be crime. As dry statistics don’t give the whole picture, we decided to see what locals and visitors said via message boards and social media about which cities might be the most dangerous.    Here are 10 that kept coming up (in no particular order).

1. Euclid Avenue: A few posters on Reddit.com cited Euclid Avenue as a downtown hotpot for criminal activity. Sure enough, a news story on the Cleveland.com website details that in September 2015 a gunman opened fire on a crowd gathered on Euclid Avenue.  The town has also been mentioned as having one of the higher crime rates in the city.

2. East 55th and Scoville: A poster on Virtual Tourist warns to steer clear of heading east when you leave the Little Italy area. The poster, a 20 year Cleveland resident, cites car break ins and property crimes as the main problems. Apparently car thefts aren’t all that’s going on in that neighborhood, according to a Newsnet 5 article where an unknown assailant shot two individuals, and then robbed them.

3. Clark-Fulton: Another Reddit contributor says that he cannot keep anything in his garage in this crime ridden neighborhood for fear of property crime. Again Cleveland.com shows this warning to be an understatement, as recently two men were shot, and one killed in the Clark-Fulton neighborhood. The murder victim was found in a car, and the second one had already fled the scene to get treatment at the nearby hospital.

4. Scoville Avenue: Scoville Avenue in its entirety has been named the 2nd most dangerous neighborhood in the US, according to Clevescene.com.  The sites gives second hand data, claiming the ratings were judged by Neighborhood Scout and taken from the FBI database of crime. This assertion was disputed by local law enforcement and residents, saying that much of that neighborhood is a cemetery. This infamous neighborhood did not appear on the 2013, 2014 or 2015 most dangerous lists, but has had its share of violent and property crimes.

5. St Clair: A poster on CityData.com forum claims that St. Clair -Superior neighborhood is one of the worst in the city. This view of the neighborhood is changing however, as the St. Clair-Superior Development Corporation is working hard to revive the once thriving area.

6. Hough: Famous for its history both good and bad, Hough was the location of the 1966 Race Riots, which caused many people to flee the area, and many to stand up and try to make it better. Unfortunately, this area still has a bad reputation on some message boards for crime, and a recent death of a hard working family man from a gunshot right outside of his home still causes sadness and upheaval in this diverse neighborhood.

7. Garden Valley Projects/Kinsman Road: Another poster on the CityData.com forum says that the Garden Valley Projects as a hotbed of crime. The brutal poverty of the area may have something to do with the label as a “dangerous” neighborhood; however, residents are not losing hope. ABC News recently did a story about how the community, with aid and opportunities, is helping to transform itself to its former glory.

8. Wade Park: Wade Park was also included on the CityData.com board as being a crime infested area. With news reports of gang activity and shootings, its clear that its a dangerous spot of drugs, gang wars, and crime.

9. Metro Health Area: Reddit.com posters also cite the area around the Metro Health Complex as a hotbed of crime. This is supported by a report by Cleveland News 19 about a murder-suicide that took place in the parking area. Pickpockets, muggings, and car break ins are also reported on social media boards. Any metro area closed to public transportation can be a place for crime, both property crimes and violent ones. People are coming and going from the busy hospital at all times of the day and night, so it’s important to stay in well lit areas, and ask for a security guard to escort you if you feel unsafe.

10. Little Italy: Wherever tourists and locals congregate there is a possibility for crime, and Little Italy was mentioned on several boards as a place to watch your wallet while enjoying your fettuccine. A particularly brutal crime occurred in a church parking lot where a priest was pistol whipped and robbed in a church parking lot, according to Fox 8 News. If this horrid crime can happen to a man wearing a religious collar, what chance do the rest of the unsuspecting victims have? It’s a great place to visit, but don’t let down your guard.

Neighborhoods in Cleveland are transforming rapidly, and what may be listed as a dangerous area, may soon be a hot spot for urban professionals to roost.  However, these 10 are what we’ve found to be the most common suspects as being “dangerous.”