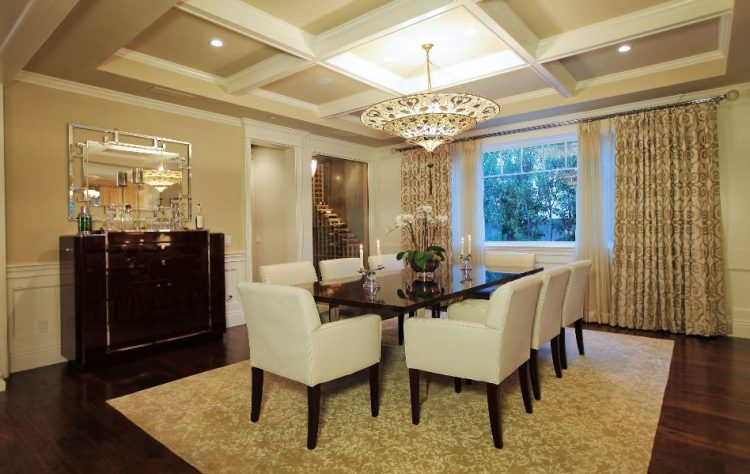 The ceiling is one of the most underrated features of interior design. Most people would argue it’s because the ceiling is the least noticeable thing people pay attention to when entering a room. The truth is, a beautifully installed ceiling can leave your guests in awe as they gaze up at the majestic wonder.  In addition to aesthetics a well constructed ceiling can save considerable amounts of money as well as time.  Quality is extremely important to both the structure and safety of a home.  With that said…..

Here are 10 ceiling styles that are most popular right now: 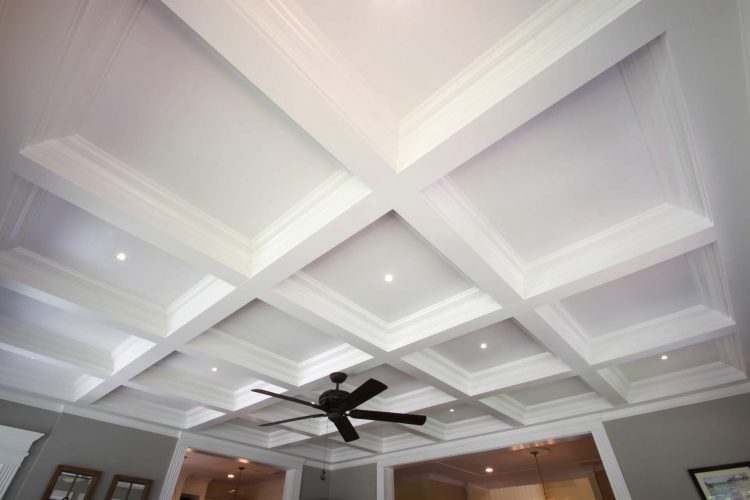 A coffered ceiling is a pattern of recesses or indentations in the overhead surface of an interior. A “coffer” in architecture refers to a sunken panel in a ceiling and includes the interiors of vaults and domes. While coffers have gained popularity over the recent years, they have been in use for centuries. When installing a coffered ceiling, the most important thing to consider is the dimension of the finished beam, and not the crown molding. 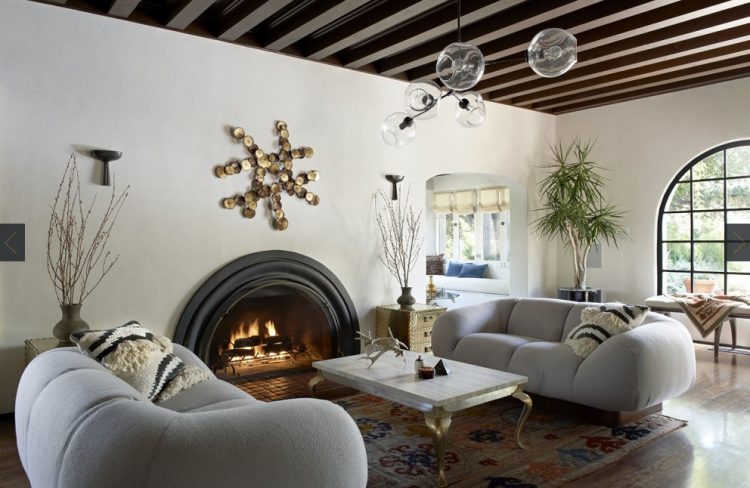 Stripes are very popular in modern interior design. Before starting a project that involves painting stripes, you need to determine whether your room is suitable for this style. Ceiling stripes can be hard to achieve, and you have to ensure that it matches with the rest of your décor to avoid a negative impression. It’s recommended to assign this type of project to a professional. Striped ceilings can look great in such rooms as the bedroom, nursery, or the bathroom. They may be too colorful or too casual for the living room, and too tiresome for the kitchen. 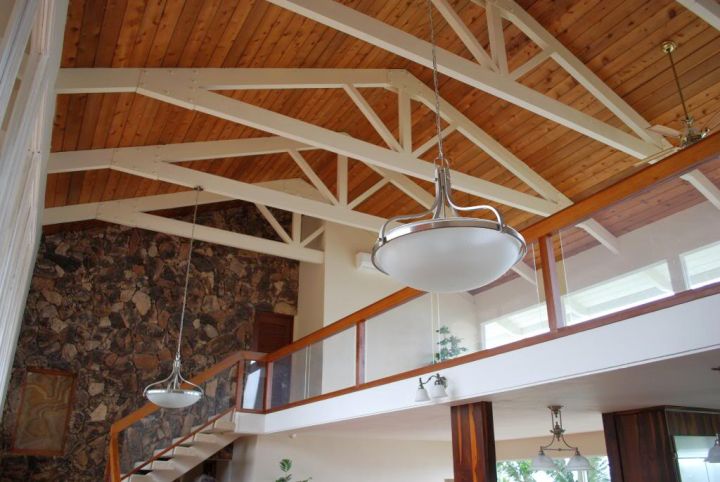 Beam ceilings are a specialty ceiling treatments that are growing in popularity. Traditionally, they were combined with a more rustic décor but are increasingly finding their way into eclectic home designs that incorporate different styles, for instance, contemporary-mountain. Beams fitted in a vaulted ceiling can produce an interesting contrast and depth.

This type of ceiling design can be finished with a wide range of hardwood or molding options. There are lighter weight faux beams, which are meant for visual impact, and load bearing beams that are assimilated into the actual structure of the house. 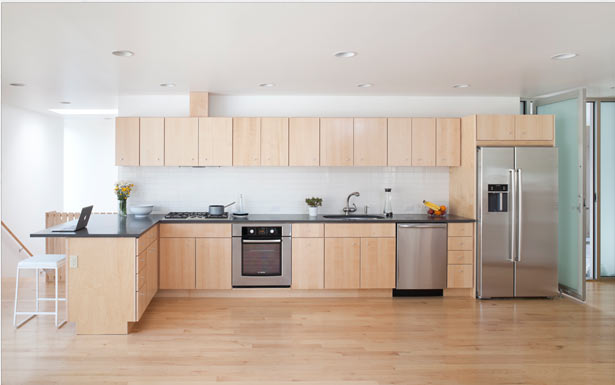 Conventional ceilings are usually eight feet high, and can be textured (aka popcorn – sprinkled with particles that resemble painted popcorn kernels) or flat (resembling typical walls). In a customized home, the initial floor ceilings can be extended to nine feet in height. 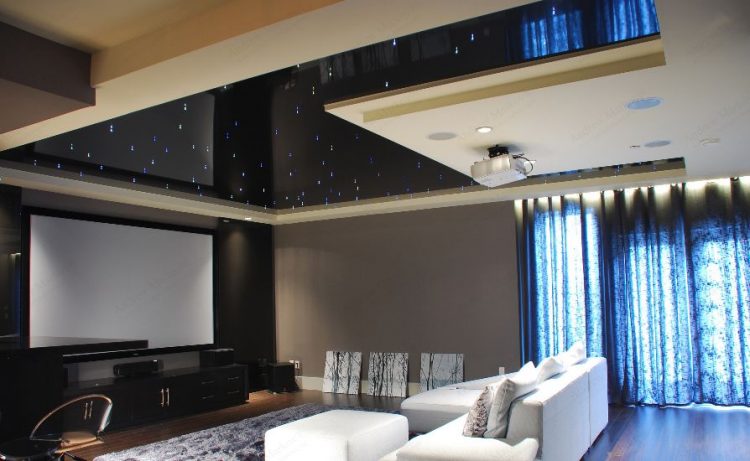 Stretch ceilings can be confused with dropped ceilings in appearance, mostly because they are installed below the structural ceiling. A stretch ceiling normally uses a PVC (polyvinyl chloride) material, which is “stretched” through a region and supported by a frame known as a “perimeter profile”. You can curve and shape this perimeter profile as you wish, and paint or color the PVC to suit your taste. As such, stretched ceilings provide a great deal of freedom when it comes to lighting, coloring, and shape.

It can also hide the poor condition of an existing ceiling, and conceal ducting, wires, or pipes. Stretched ceilings are popular in music rooms or home theaters, where they are used to improve their acoustics or provide soundproofing. 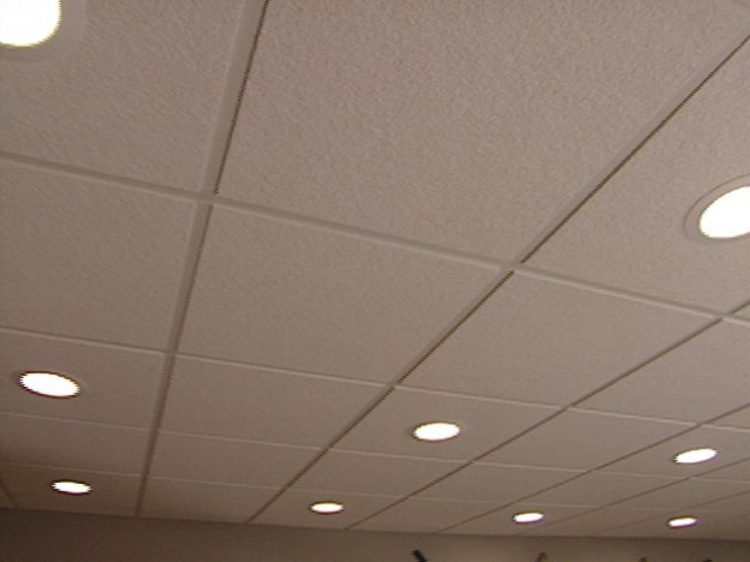 A dropped ceiling is a protruding ceiling that hangs below the primary ceiling, and is often installed in commercial and industrial buildings with roofing tiles. They can be used in residential buildings, but the existing ceiling should be high enough to accommodate it. A dropped ceiling can go a long way towards disguising the poor condition of a primary ceiling, or hiding wires, ducting, and pipes. The distance between the structural ceiling and dropped ceiling is called a “plenum space” and can vary from a few centimeters to several meters.

The tiles and panels on the surface of a dropped ceiling can come from a variety of materials. Tiles designed from spun fiberglass or mineral fibers can help in improving the room’s acoustics and enhancing soundproofing. Plastic, cork, and tin are frequently used. The grid arrays and frames are usually made of metal. Suspended ceilings are normally associated with commercial or industrial buildings, and sometimes large scale urban dwellings. 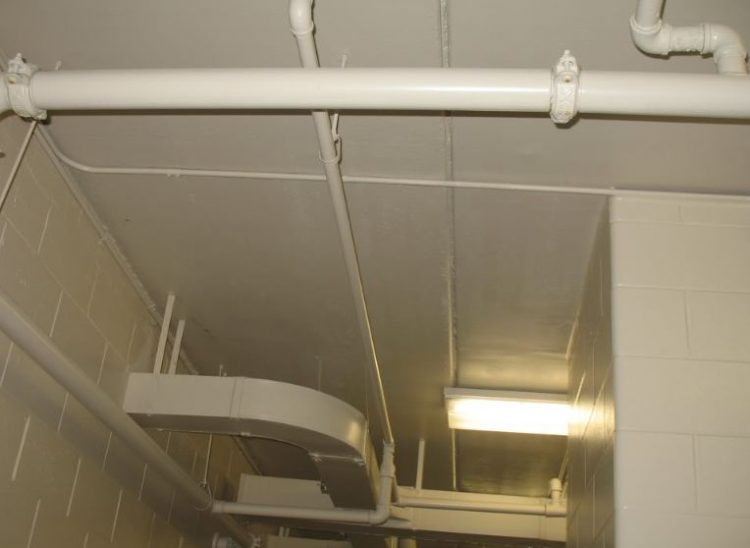 These types of ceilings are made from pre-stressed, precast concrete slabs with tube-like tunnels running across. The concrete slabs are also known as hollow core planks or voided slabs. The finishing on the surface of the ceiling can be polished or painted, or sprayed with a soundproofing material. The ceiling itself is made from either normal slump or very slow slump concrete with a 50-130mm thickness. Hollow-core slab ceilings are common in multi-story apartments, where they are used as a pocket friendly way of creating ceilings and floors over large spaces. 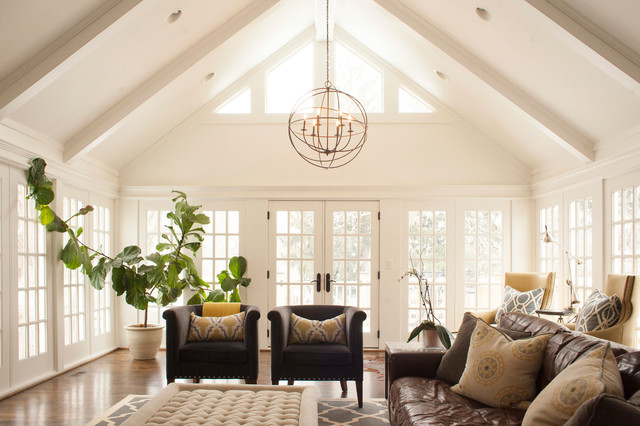 Cathedral ceilings have been used in buildings for years to provide a high-sloping line up over the house. Cathedral ceilings make rooms feel bigger by creating a spacious feeling, and are generally installed in first floor family or living rooms. Recently, they are becoming more popular in master baths, master bedrooms, and dining rooms.

This ceiling style is an artistic element incorporated into certain ceilings to provide character and a unique attribute. Tray ceilings are installed horizontally from the wall intersection, from which they extend upwards in a cutout that looks like a tray. This cut can be angled or vertical, while the tray itself can start from 6” to 1’ or deeper. In some cases, they include a series of steps to offer a more dramatic effect. They can also be painted to accentuate the vertical steps and ceiling in general.

The ceiling can either be “raised” or “dropped,” depending on the structure above the room and the height of the ceiling. Trey ceilings are often used in master bedrooms and dining rooms. 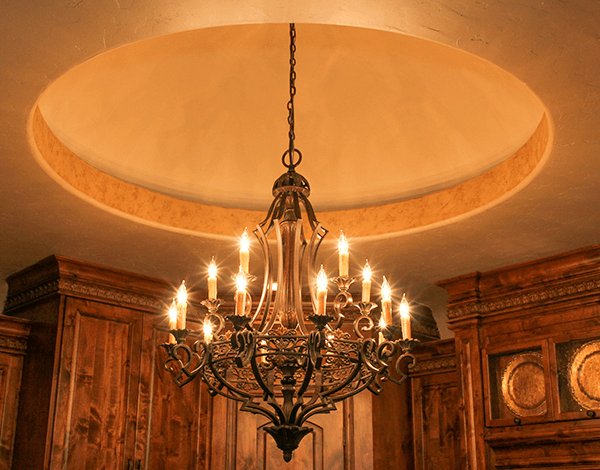 These types of ceiling styles are often used in large, grand homes. They can be a unique architectural feature to mimic the round dome of a government building or ancient church. In some cases, the dome is topped with a stained glass or skylight oculus to allow natural light into the room and create a greater dimension from the ceiling.