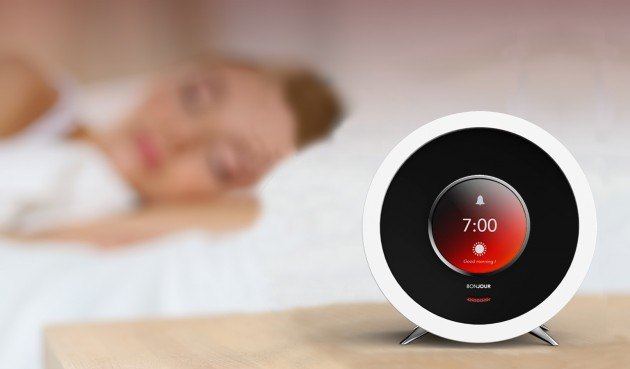 Waking up is often one of the hardest parts of the day. For many people, getting out of a comfortable bed to get to work or school is a struggle. Taking any extra time can mean skipping breakfast to rush to the bus or start driving.

Alarm clocks have generally had the same functions for many years. Their features largely consist of displaying the time and setting an alarm for a certain time that can be either beeping or music. Some alarm clocks have iPod docks, but few have any other features to make waking up an easier process.

Bonjour, on the other hand, is a smart alarm clock that is specifically designed not only to wake a person up, but do so in a way that is convenient and intuitive. Its most impressive feature is its artificial intelligence that allows it to learn and adapt to a person’s schedule. This is a clock that optimizes time to ensure there will be no rush in the morning.

The company behind Bonjour is Holi. This is a technology start up that is dedicated to improving the health and wellness of its customers. Holi believes that one of the most important ingredients in a healthy lifestyle is quality sleep. Therefore, its products are specifically designed to help users fall asleep quickly, have an energizing rest, and wake up easier. Their devices cover the entire sleep process, from falling asleep to waking.

The idea for Bonjour was initially introduced in late 2014. Throughout 2015, the main research, design sketches, 3D modeling, and software outlines were created. This led to the creation of the first prototype for the alarm clock in 2016.

Throughout the spring and early summer of 2016, the artificial intelligence software was developed, and the hardware began to take shape. The final design was completed in September.

In October, Bonjour’s Kickstarter campaign was launched. This will allow the tooling and software to be finalized by early 2017. It is expected that the alarm clock will be available for shipping to backers by May, 2017.

Having an alarm clock that is personalized, versatile, and able to optimize the waking process is an idea that was clearly attractive to consumers, as the Kickstarter campaign has raised more than three times its $50,000 goal, pulling in over $175,000. So far, more than 1400 backers have contributed.

Bonjour is a sleek alarm clock that is specifically designed to make waking up easier and more efficient. Its artificial intelligence is able to learn and adapt to a person’s schedule, optimizing the morning routine. It also houses a variety of features which make it a connective hub for many other devices.

Bonjour features a human voice and has voice recognition to allow the user to speak commands. It is able to learn and improve its own language through the commands spoken to it. It can answer questions like “What will the weather be like tomorrow?” For privacy, its hearing can be turned off.

However, the real benefit of this clock is that it can learn a person’s schedule and routine. By adapting to how long it normally takes the user to get ready in the morning, for example, the clock can automatically set an alarm that will give the user enough time to wake without being rushed.

With its artificial intelligence, the alarm set with Bonjour is integrated with a person’s routine and calendar, so it can prepare the alarm schedule itself. As well, it is able to check traffic updates and weather conditions to estimate how long a commute will take. It will adjust the alarm accordingly in order to ensure that there is no stress about being late.

If a user has an outdoor activity planned, the clock is able to check weather forecasts and updates on its own. It can let the individual sleep in if conditions will prevent the activity from happening.

Further, Bonjour can connect with other smart devices and use its artificial intelligence to optimize the entire sleep process. For example, it could automatically ensure the door is locked before going to bed, adjust the temperature to be slightly warmer just before waking, and turn on the lights to a comfortable level as the alarm goes off. Working with devices like Nest allows the intelligence of Bonjour to extend far beyond just alarms.

It is easy to connect devices to the clock with its smartphone app. This can be connected to fitness tracking apps, and the clock’s large HD screen can even display a feed from a connected security camera. Conveniently, it also houses a USB charger to keep other devices charged.

In addition, the clock is able to display video messages and even stream music from services like Spotify, making it a smart clock that can be used for security, communication, and entertainment, as well as making mornings easier.

Not only does Bonjour offer a plethora of features and services, it also fits beautifully with the décor of any room. It has a clean chrome finish, and its large screen displays gorgeous color.

Kickstarter is currently offering discounted prices for early buyers. One of these clocks can be had for only $109, or two for $189. These are remarkable prices when one considers how many features are packed into this device. However, these deals are selling out quickly

For most people, waking up is an unpleasant experience. Feeling groggy, being jolted out of a dream by an alarm, and scrambling to get ready after sleeping in can all make a morning far more stressful than it needs to be.

With the artificially intelligent Bonjour, morning routines are efficiently planned. The clock is able to adapt not only to a person’s particular schedule, but also to weather and traffic updates. In addition, it can connect to a wide variety of smart devices through its mobile app. Using voice recognition technology, controlling Bonjour just feels like having a conversation.

It is a remarkable price that is excellent for anyone looking to improve their mornings and have confidence when going to bed each night.