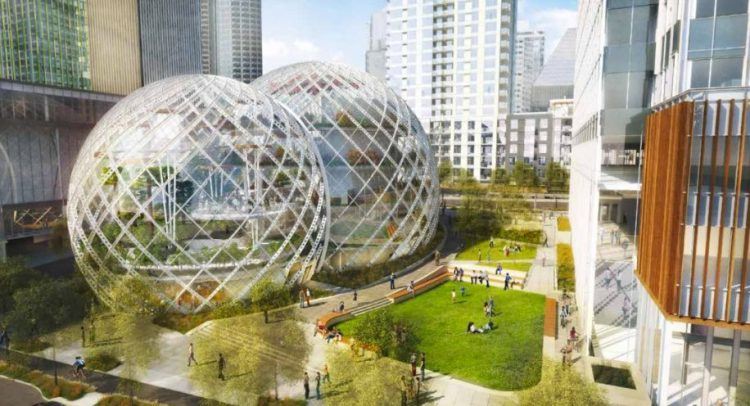 Many people in the business world have been speculating about Amazon and Real Estate. Has the online retail giant set their sights on taking over the online real estate market in the near future? Some even wonder if they might launch a major realty portal like Zillow or come out with some proprietary software for property listings.

If they were going to do any of that, they would probably start in Seattle where their presence is already being felt in a big way. This seems to be making it clear to interested observers that the biggest online retailer in the world may not be selling real estate, but they sure are buying and leasing a lot of it, especially in downtown Seattle. Amazon recently leased every square foot of office space in one building’s top five floors centrally located at 428 Westlake Ave. N.

That’s in the South Lake Union neighborhood of Seattle. Amazon will be occupying 81,000 square feet in the six-story building. The building is 12 years old and Amazon will be moving in as soon as the tenant improvements are completed, which is estimated to be early 2017.

Amazon currently owns and leases 8.5 million square feet in Seattle with more to come, according to John Schoettler who is the company’s real estate director said this summer. He also stated that they are projecting the owning and/or leasing of 12 million square feet as early as 2022. The company is also allegedly planning to commence construction on its third Denny Triangle high-rise and, according to local real estate companies, Amazon is also planning an expansion into downtown Bellevue, where it currently leases a new 16-story building.

The third block of Amazon’s high-rise campus is located between Lenora and Blanchard streets and 7th and 8th avenues in Seattle and is expected to include an eight-story building and a 38-story building. The total office space area will be 1.1 million square feet plus store space on the ground floor and 1,128 underground parking spaces. The company began the move into the first tower recently and, across the street from it, the second tower is currently under construction along with a center building that is spherical-shaped. Both are projected to open soon and the third tower will be ready in 2018.

It was a Very Good Year

It’s been an extremely strong year for Amazon with stock prices that more than doubled and major cloud revenue that is positively going through the roof. In addition, the company garnered a massive three million new Amazon Prime members during the week that lead up to Christmas weekend 2015. With growth like that, coupled with an estimated net worth of around $5 billion to $6 billion, Amazon will more than likely need to hire more people, which will inevitably lead to buying more land and building bigger buildings.

Amazon is now also offering home services to major metropolitan area homeowners who can now browse service providers like wall-mount television installers, appliance installers and repairmen, and even house cleaners. They can also schedule and purchase a number of services online. This type of service has long been dominated by Angie’s List, but not anymore. Amazon may also be following in several other start-up companies footsteps by offering some exclusive services just for real estate agents. Could that be the first step for Amazon in moving into the real estate market?

Well possibly, however, for the time being, their goal is making booking home services and paying for them as quick and easy as buying merchandise online. So, just think, you could buy that item that looks incredibly difficult to assemble online at Amazon.com and book someone to put it together for you at the same time! Bet they’ll be busy during the holidays putting together all of those shiny bikes for parents who just can’t fathom those complicated instructions that seem to be in another language.

The company has already been rumored to have made a major move into the brick and mortar retail realm with plans for three to four hundred stores, which is way more than any other Internet retailers. Everyone seems to be continuing with their belief that a stronger focus on physical retail could be a segment of the long-term growth story of Amazon.com as evidenced by some recent interviews with Amazon’s CEO of General Growth Properties (GGP). He has been indicating that Amazon’s dreams of getting into real estate in a big way could be coming to fruition, citing his strong belief in the merging of traditional retailers and online retailers. He also confirmed the rumor about the goal of Amazon to effect the landmark opening of 300-400 bookstores.

The Seattle store, called Amazon Books, offers shoppers an essential blend of e-commerce and traditional retail. Those who have visited Amazon Books ended up believing that it most definitely was a template for a major Amazon store roll out. Their bookstores feature strong links to Amazon.com, i.e. sales of Amazon devices, as well as pricing that is consistent with their online prices.

Since Zillow’s inception in 2007, the online company has become a true real estate monster. Now that they have acquired Trulia for a mere $3.5 billion, the company is joining the exclusive club of tech big boys in the Seattle area like Amazon and Microsoft. Only the purchasing of Nokia and Skype in 2010 can surpass that deal. Just like those other monster companies, the Zillow-Trulia giant will be at the forefront of a quickly growing new industry. The newly merged real estate conglomerate will be spending $100 million or more over the next year for advertising with the goal of expanding its user base that is already at 137 million. The implications of Amazon joining in the fray are pretty amazing.

So, whether Amazon has any serious plans for giving Zillow and Realtor.com a run for their money remains to be seen, but judging from their recent major expansion, it would seem like a logical and, yes, very lucrative next step. Amazon is simply leaving everyone wondering if it’s just a matter of time before all of the online real estate companies have to start looking over their shoulders because here comes AmazonRealty.com.