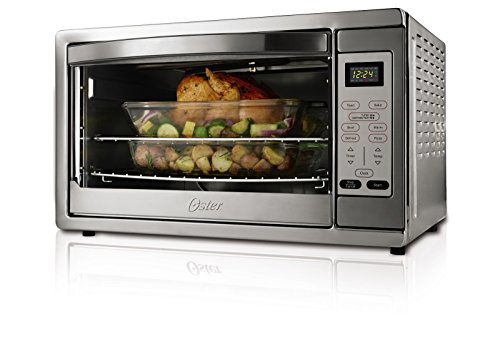 When most people think of convection ovens, they probably see them as nothing more than a waste of counter space.

Why get a convection oven when you have a full-size oven? Right? Wrong!

So, what does this mean?

According to The Kitchn, ” a convection oven has a fan and exhaust system that a regular oven does not. The fan and exhaust help blow hot oven air over and around the food, then vent it back out. As a result, this hot air surrounds the food so that it cooks evenly and more quickly.”

If you’re one of the people whose oven doesn’t have a convection setting, but you’re interested in exploring this cooking option, we’ve got all the deets.

Here are 5 reasons your kitchen needs a convection oven.

Have you ever tried to cook multiple dishes in your oven at the same time only to realize the flavors ended up being a little wonky?

Fortunately, a convection oven, the special fixture will eliminate the transfer of scents and flavors.

In addition to not having to worry about things tasting funny, you also won’t have to worry about certain foods cooking quickly and not as thoroughly as others.

Cooking can be time-consuming. With a convection oven you can lower cooking times on all of your favorite dishes by about 25%. This means preparing food will be less of a hassle and you can enjoy more time actually eating.

Since convection ovens cook quicker, and typically at lower temperatures, than conventional ovens, you’ll use less electricity when cooking.

That’s something you won’t have to worry about with a convection oven. Since these ovens are equipped with special fans to circulate the air, your food will cook much more evenly.

When cooking in a regular oven, you have to be mindful of which rack you place your food on. Your food can cook differently depending on where in the oven you place it.

With a convection oven, you can place your food anywhere in the oven and won’t have to worry about how it will turn out.