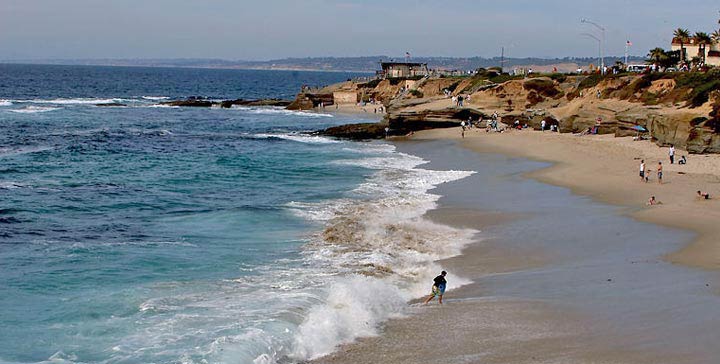 San Diego has great weather and tons of entertainment options. Whether sports, dining, or live performances are your idea of a great time, you’ll find it all in the nation’s eighth largest city. The problem? A lot of the activities available in San Diego are expensive. The Gaslamp District, Sea World, and even the San Diego Zoo come with high price tags and are nowhere near budget friendly. Fortunately, it is possible to have fun in the city without spending a ton of money. If you’re looking to experience San Diego without breaking the bank, here are 10 things you can do that cost $10 or less.

There are well over 30 beaches in San Diego, and all are free and open to the public. Nice beaches are one thing that SoCal is known for, and if you’re trying to have fun on a budget and you like being outdoors, it’s the perfect thing to do. There’s 70 miles of coastline in San Diego, so you’re sure to find a sandy spot that you’ll enjoy.

2. If you’re going to Mission Beach for the day, take a detour to Belmont Park and go for a ride

The Giant Dipper is one of the most iconic attractions at the park, and it’s a big wooden roller coaster. The Giant Dipper costs $6, but there are plenty of other rides in Belmont Park as well, and most of them cost $5 or less. Getting into the park is free, and you can pay as you play. If roller coasters aren’t your thing, try the $3 Speedway, $4 Vertical Plunge, or $5 Octotron.

3. Head to Little Italy and see a concert at The Casbah.

This great live music venue has a full schedule of shows throughout the week, and many tickets cost $10 or less. Considering the quality of the venue and the acts here, that’s a huge bargain. The list of famous musicians that The Casbah has hosted over the years is enormous, and if you want to see a show it’s best to get your tickets early — it’s not uncommon for tickets to sell out quickly.

4. Get in a few rounds of late night bowling

Yes, most movies cost more than having a meal at a restaurant, but there’s one place in San Diego where you can see a movie for less than $10 — seriously. The South Bay Drive-In near Imperial Beach costs just $9. Bring your own food and drink to snack on, pull up into a spot, and enjoy the show. There aren’t many drive in theaters left in the country, so being able to visit one that shows the latest features and has an awesome setting is a treat.

If you’re a shopper who likes to browse and pick up an item or two, no doubt you’ve tried the many malls and shopping centers in San Diego and found them to be quite expensive. Go to Koby’s Swap Meet on Friday, Saturday, or Sunday, and you’ll be able to buy a few items and still have change to spare. You’ll find vendors that sell antiques, t-shirts, books, art, flowers, posters, and much more. Admission costs just $1 on Fridays and is $2 Saturdays and Sundays. Haggling is perfectly acceptable here, and if you also like people watching you’re in luck — Koby’s Swap Meet is ideal for it.

Yoga fans in San Diego have likely discovered two things: there’s a seemingly endless number of places to take a yoga class, and nearly all of them cost an arm and a leg. However, if you have time on the weekend you can get your yoga on for less than $10. On Saturday morning from 10am to 11:30am, you can join a well known yogi by the name of Nama Steve (otherwise known as Steve Hubbard) as he leads his weekly class. The cost is your choice, as this particular session with Nama Steve is donation based. Classes are typically in Pacific Beach at the end of Law Street. You can check this meetup page for more details.

8. Go for a beer tasting at Stone Brewing Co.

Their public tour for $3 is an absolute deal. You get a tour of the Stone Brewing Co. facility, four 4 ounce samples of their great craft beers, and a souvenir tasting glass to take home. One of the beers that you’ll taste is a special release brew. If you prefer not to drink but would still like to get an inside look at Stone Brewing Co., there’s also a $1 tour. You won’t get a souvenir glass, but it’s still an interesting activity. After your tour, head to the on-site bistro for a quick snack or dessert.

9. Take a ride on the Coronado Ferry

This is a unique activity that’s a must-do if you’re visiting the area or you’re a San Diego resident who’s simply never taken the scenic ride. You’ll depart from Broadway Pier, ride across the bay in a ferry for 15 minutes, and then arrive at Coronado Ferry Landing. If you have a bike, you can bring it on board at no extra charge. A one-way ferry ticket is $4.75 per passenger, and children 3 and under ride for free.

If you just want to sit down and enjoy the marshmallows and chocolate without doing any prep or finding sticks, go to Halcyon in East Village. The coffee bar and lounge has smores for two that you can roast at your table for just $7. If you prefer to go the DIY route, stop at the grocery store, get some big marshmallows, chocolate bars, and graham crackers, and make a bonfire at one of San Diego’s many beaches. Ring up some friends, have them bring food and drinks, and you’ll have a very fun party on a tiny budget.