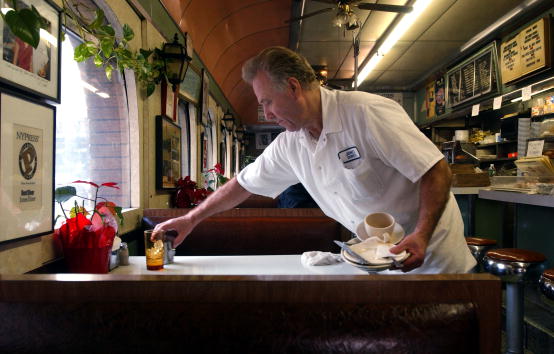 New York City might be the land of opportunity in many peoples’ eyes, filled with skyscrapers, big business and a nightlife that is unmatched by nearly any city in the entire world. One of the many things that makes NYC so appealing is the mix of cultures, with people from around the world coming to this one city and leaving their own mark on it. With so many food options, things can, typically, get a little bit expensive, with residents and visitors spending more on grub than they probably want to when eating out. Rest easy, though, because there are places where one can get a great meal for cheap, and these are them, as they’re the 10 New York City restaurants where you can get a great meal for under $10.

As a vegetarian, I just had to add the restaurant Taim to this list, because it’s one of the tastiest places in New York City—and it’s not expensive at all. With the name literally meaning “tasty and delicious” in Hebrew, you know that they aren’t going to serve anything that doesn’t hold up to the name itself. Offering traditional falafel wraps and sandwiches with fresh sauces and toppings for about $6, Taim also has a number of salads and smoothies if you’re not feeling a sandwich. Oh, and they have a food truck, so they may even be close to where you work if you can’t make it to the West Village spot during the day.

When you ask someone where the best Japanese in New York City is, they will, typically, steer you towards the best sushi spot. But for those who want to enjoy Japanese dishes without just raw fish as an option, try Go! Go! Curry, which serves up a bevy of traditional choices that pack both the protein and the flavor. Maybe even best of all, the places doesn’t charge out the wazoo to enjoy their food, with each order under $10.

It might sound like a little bit inappropriate, but, trust me, the food at Sticky’s Finger Joint is anything but R-rated. Fried chicken deep-fried and served on a plate to satisfy the taste buds of visitors, this place is a must-go. Making a variety of special sauces for chicken to be tossed and dipped into, prices are ridiculously cheap, ranging from $2.50 to $4.50. If you’re feeling really adventurous, grab some $4 truffle fries to compliment the tasty chicken.

When a restaurant has the words “fast food” actually in it, it may turn a few people off. Don’t make the mistake of being so ignorant when it comes to Wah Fung #1 Fast Food, as it delivers some of the tastiest dishes at an affordable price. Authentic Asian food for those who are looking for some, the portions of roasted pork, duck and chicken over rice are hefty, yet only cost about $5. You can’t really beat that.

While some prefer a loaded hamburger with toppings that make it hard to even fit in your mouth, Mark bucks the trend of gourmet burgs and instead goes for something a little more practical—sliders. Known for their mini versions of burgers, they spare nothing when it comes to flavor, with the joint usually packed to the brim with people who love these things. A box of four costs just $10, but if you want to live a little bit more, spend the extra dough and get yourself chili cheese fries and a Guinness shake to wash it all down, you won’t regret it.

The food itself might look a bit fancy, but the prices will make you think that you’re eating at a Subway restaurant, because Gaia Italian Cafe doesn’t charge visitors an insane amount to enjoy their dishes. A homestyle cafe with low prices, a unique panini will set you back just $7 or less, with alcohol being BYOB, making an afternoon or early evening out more than just enjoyable, but affordable, too!

If you enjoy hamburgers, french fries and shakes—and who doesn’t?—take a trip to Smashburger, which have a number of locations around he Big Apple. While the West Coast boasts about In-N-Out Burger, New Yorkers can talk about how delicious this joint is, offering a number of great options for under five bucks. Sure, it might not measure up to the West Coast version in some visitors’ eyes, but it’s just as solid to eat and cheap—which are two things that everyone likes to hear.

Hiding in the back of Chelsea Market is a place called Los Tacos, which is a gem of a place to grab street tacos while in a rush. With no tables and barely any standing room, it has the feeling of a food truck, with meals so good that you’ll wish you could just hangout all day long and eat. From $3 tacos to a full plate for $6, if you can deal with the long lines every single day, you’ll leave happy and full.

Located in Chinatown, Prosperity Dumpling is one of those places that, once you visit, is hard to stop going back to. Giving visitors, arguably, the most bang for their buck, the place offers fried dumping for a simple dollar, and will steam them for $2.75. That’s absolutely insane considering it’s a hearty meal most of the time. Serving up sesame pancakes and noodles for less than $3, too, Prosperity Dumpling might just become your favorite place to go out to eat in the city.

No matter what type of sandwich you prefer, Court St. Grocer’s will whip it up for you—and there’s a good chance it’ll be the best you ever have. Packing in ingredients and drizzling sauces on top of them all, this place doesn’t shy away from filling you up each time you visit. Whether you’re getting their classic Italian Combo for just $10 or a breakfast sandwich for $5.50, there isn’t a bad choice at this spot in Carroll Gardens.