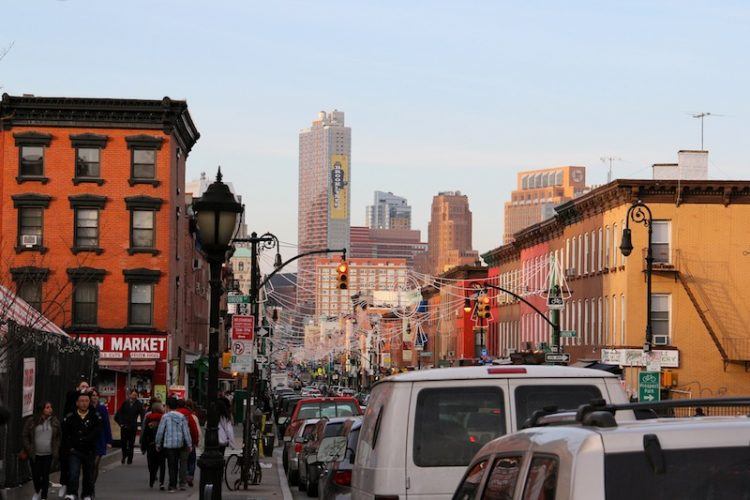 In 1898, Brooklyn became one of the 5 boroughs of New York City. The borough attracted immigrants and refuges from Europe and ethnic groups of Manhattan. Due to its location on the East River, Brooklyn became a major industrial and shipping hub of New York. As Brooklyn developed, its neighborhoods became distinct enclaves for ethnic groups and businesses. Brooklyn’s population quickly grew throughout the 19th and 20th centuries.

In the past few decades, young professionals have been moving into Brooklyn. Its close proximity to Manhattan makes it a fairly easy commute. Its lower rents are appealing to young professionals from the city and students of New York City’s universities. The result has been gentrification of several of Brooklyn’s neighborhoods. Gentrification involves the revitalization of neighborhoods and updating housing and businesses for the middle class. The result is remodeling of 19th century and pre-war buildings and warehouses. Modern kitchens have been added to former tenements. Warehouses have been turned into lofts. The result is revitalizing Brooklyn, but also raising costs of living, forcing long time residents out of their neighborhoods. Many areas of Brooklyn are slow to gentrify. Despite lower rents, the areas are still economically struggling.

Here are 10 of the most dangerous neighborhoods in Brooklyn.

Unfortunately the Brownsville neighborhood is one of the few Brooklyn neighborhoods that have not seen signs of gentrification. The neighborhood in eastern Brooklyn is filled with public housing for lower income residents. Brownsville has the highest poverty level and crime rate in New York City. Once called the “murder capital of New York”, Brownsville was originally home to many tenements during the mid to late 1800’s. It was home to many Jewish factory workers escaping the slums of the Lower East Side of Manhattan. Houses consisted of 2 story wood frames built for 2 families to reside in.

The utilities were poor and the homes were prone to fires. In the 1930’s and 1950’s, Brownsville was the home of “Murder, Inc.” which had contract killings of between 400 and 1000 people. In the 1950’s, Brownsville developed many public housing units for the growing, low income residents. The neighborhood faced social disorder with rioting, arson and luting leading to urban decay. Subsidized multi-unit townhouse construction during the 1980’s temporarily lowered the crime rate.

Today, the 1.63 square mile Brooklyn neighborhood of Brownsville has a dense population over 58,000. There are over 28,000 housing units in the neighborhood. The average income of residents is between $15,000 and $30,000 a year. Poverty and drug addition over the past decades have led to many empty lots and empty storefronts.

Bushwick is a working class area in northern Brooklyn. Developed by German immigrants in the mid-1800’s the neighborhood was an industrial area with several breweries. By 1890, “Brewers Row” consisted of 14 breweries in a 14 block area. The last brewery in Bushwick closed in 1976. At that time, the neighborhood experienced riots and looting.

Bushwick has diverse housing. It consists of public housing projects, 2-3 family townhomes, and 6-family apartment buildings. The 1.305 square miles and a dense population of over 29,000. The median rental is $795 per month. In the mid-2000’s, the city and state of New York began the “Bushwick Initiative” to revitalize the housing and economy of Bushwick. The city has been slow to revitalize, but because of the lower rent, young professionals are beginning to move to the neighborhood. The crime rate remains higher than other parts of Brooklyn.

East New York is a residential neighborhood at the eastern end of Brooklyn. It consists of 1.867 square miles with nearly 92,000 residents. The area developed as an industrial region and railroad hub during the 19th century. With an increasing population for manufacturing jobs, East New York incorporated elevated transit lines to accommodate more housing. After World War II, East New York lost many of its manufacturing jobs leading to socioeconomic problems. As unemployment and crime grew, so did poverty and drug addiction. Hit hard by the mortgage scandals of the 1970’s also affected East New York.

East New York consists of different subsections including Cyprus Hill. Starlett City is a large subsidized apartment community. The Hole is a run down area of East New York. In 2008, the SHIP redevelopment projects helped build new townhouses in the neighborhood to house lower and middle income families. There has not been much redevelopment of the area, leaving it vulnerable to poverty, drugs, and crime.

Greenwood Heights was named for Green-Wood Cemetery where soldiers lie who were killed in the American Revolution Battle of Brooklyn. During the 19th and 20th century, Greenwood Heights’ industry economy grew with its location on the Brooklyn waterfront. Residents 1 or 2 families were built to accommodate workers. The architecture is an eclectic mix of wood frame, vinyl sided and brick homes. The late 20th century saw a decline in the area’s economy and a rise in new ethnic groups.

Currently, the population of Greenwood Heights is over 20,000. There is great economic disparity among the population. In 2005, the neighborhood began a revitalization program, building new businesses and luxury condominiums. The upper and lower class make up most of the residents. The number of non- violent crimes per 1000 people is 26.

Navy Hill is named for the Brooklyn Navy Yard. During World War II, there were 70,000 workers building ships at the Navy Yard. The neighborhood is currently home to private and commercial businesses with 3 piers and 10 berths.

The population of Navy Hill is over 11,500 living in just .64 square miles. The density of population and diverse socioeconomic population creates a disparity in cost of living. The median household income is $45,500. The median rent is $1000 a month, low for New York City. The non-violent crime rate per 1000 residents is 40.

Williamsburg and East Williamsburg were named for the engineer who surveyed the land in the early 19th century, Jonathon Williams. The neighborhood’s industry of the 19th century attracted German immigrants. The building of the Williamsburg Bridge in 1903 drew in Jewish people from the Lower East Side of Manhattan. The late 20th century saw an increase in musicians to the area. The artsy community continued to develop “hipster” culture through the last 2 decades.

Williamsburg continues to have an eclectic population. With a steady growth in gentrification, Williamsburg and East Williamsburg has developed its defunct warehouses into lofts. The 2 square mile area has a population of over 125,000 with a median household income of $35,000. Condominiums along the East River cost about $1500 a month. The area has an active nightlife and an estimate of 24 crimes per 1000 residents.

The art community of DUMBO, “Down Under the Manhattan Bridge Overpass” developed in 2 sections between the Manhattan and Brooklyn Bridge and East of the Manhattan Bridge. Originally a ferry landing, industrial and warehouses made up the community through the 18th and 19th centuries. In the 1970’s, the area was developed into an art community. The 1/2 square mile neighborhood has about 1400 residents. There is a disparity of income and housing costs. The area is seeing gentrification with the Corporate Headquarters of e-commerce site Etsy and furniture company West Elm moving into the region. The crime rate, particularly robbery, is high in DUMBO.

Fort Greene is the historic district of Brooklyn. Residents consist of Italianate and East Lake row houses. The Williams Savings Bank Tower was the tallest building in Brooklyn for 80 years. During recent years, some of Fort Greene’s tree-lined neighborhoods have been replaced by high rises and public housing developments. The home improvement loan scandals of the 1990’s led to many foreclosures.

Vinegar Hill is an “edgy”, “hipster” neighborhood south of Navy Hill. It was settled by Irish immigrants and is named for the Battle of Vinegar Hill” during the Irish Rebellion of 1798. During the 19th century, the Irish settlers worked in the Navy Yard. The 4 5 block neighborhood currently has a population of 4000. Many of the homes were built between 1820 and 1860. They consist of mostly Federal and Greek Revival houses along with industrial buildings. The building of the Brooklyn-Queens Expressway in the 1950’s destroyed many homes of the area.

The majority of residents of Vinegar Hill are lower income or lower middle class. The area has seen an increase of younger residents and gentrification. Rent ranges from $500 a month to over $10,000. The disparity of cost of living is felt in the neighborhood. There are 25 non-violent crimes for every 1000 residents.