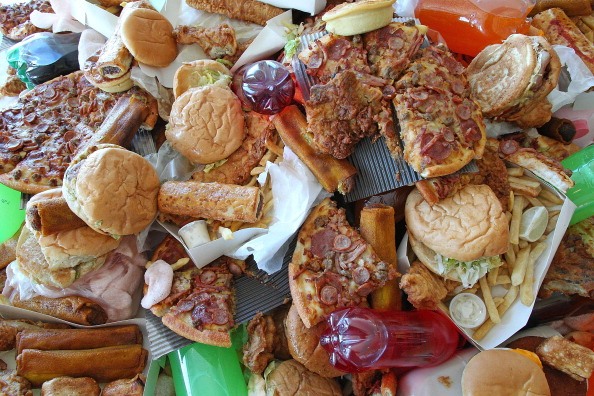 Food is delicious. I’m big on eating. I love a good meal, especially when it’s one my husband cooks. He’s an amazing cook – he should do it professionally (but he’s a banker, so he doesn’t). I love escargot in a decadent sauce, filet mignon lightly seasoned, broccoli seasoned with just a hint of olive oil and garlic and wine seasoning and baked until it’s crisp. Zucchini cut in half and sprinkled with olive oil, fresh garlic and just a hint of fresh parmesan and baked until it’s sizzling, roasted red potatoes with rosemary, edamame in the pod steamed and lightly coated with fresh garlic, EVOO and fresh parmesan…I could go on. I love good food that’s good for me, and it’s even better when it’s been paired with an amazing bottle of wine.

I admit that I even take photos of my husband’s amazing cooking, or the meals served to us at a fabulous restaurant and post them to Instagram to share with the world. I love a pretty meal. What I do not love, though, are some of the meals that people like to put on social media. Some of them look so disgusting, seem so nasty, that we should focus on laws banning them from existence, because…well, ew. Read on to see and think about the meals we’ve seen that are so disgusting they need to be banned from ever happening again. Also, we apologize if you gag. 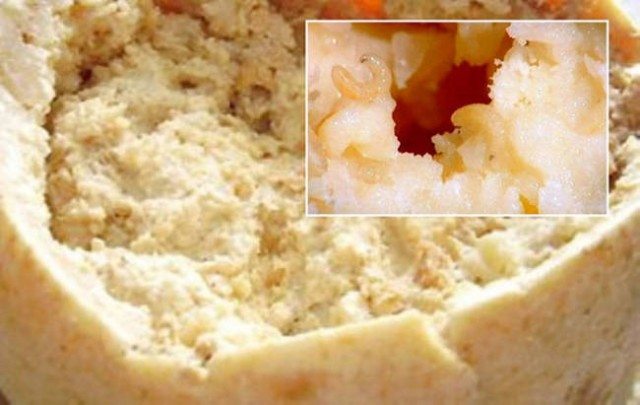 Yum. That looks amazing. Especially the maggots, right? This Mexican cheese is one to avoid – like the water. It also explains why when we spent a week in Mexico when I was pregnant with our first child, I lost 7 pounds. I was too afraid to eat at 26 weeks pregnant. Now you know why I was terrified. 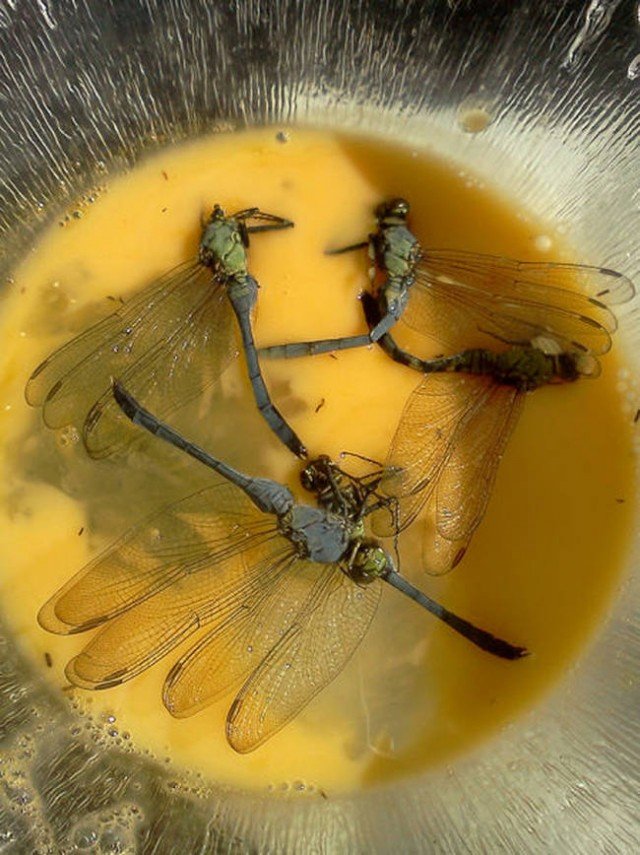 If you’ve ever been to either Indonesia or China, you might recognize this dish. In these two locations, it’s considered delicious to mix up a couple of bugs in your soup and call it a day. In America, it’s called time for a new meal since there is a bug in your soup. People really love it, though. 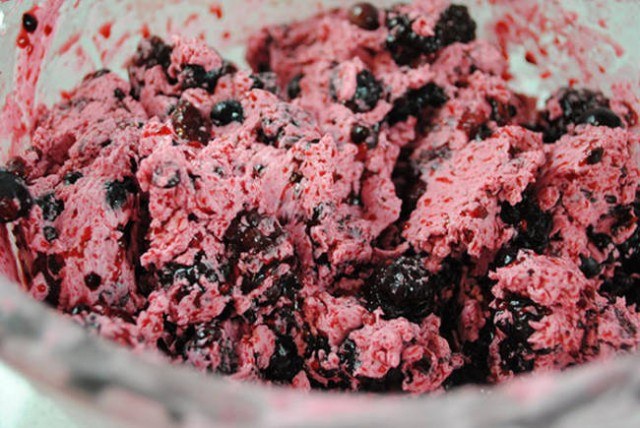 It doesn’t look so bad (in comparison to some of the items you’ve already seen and will see in this post, right? Well, it is. It’s not a treat. You don’t crave this. It’s actually fat from the body of a reindeer, put on a plate and served to you. Oh, sorry, before it’s served, your waiter will go outside and grab fresh snow, berries and even a bit of fish he’s got ground up and left over from another meal to put on top. It’s just like ice cream with sprinkles and chocolate syrup and whipped cream – except it’s not delicious and it’s nothing like that. 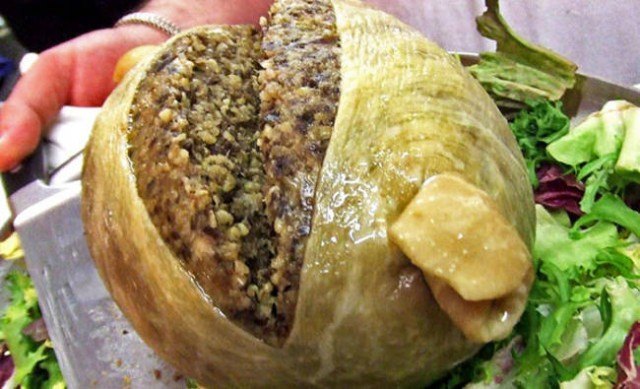 This Scottish meal is one we think needs to go away forever. It’s, and we are not joking here, the actual stomach of a sheep. As if that is not bad enough, it actually gets worse. I mean, a lot worse. Inside the sheep’s stomach on your plate of food(?) is the sheep’s other body parts. This includes it’s lungs, it’s heart, it’s liver and then a nice dash of spices, oatmeal and even onions. Um…yum? 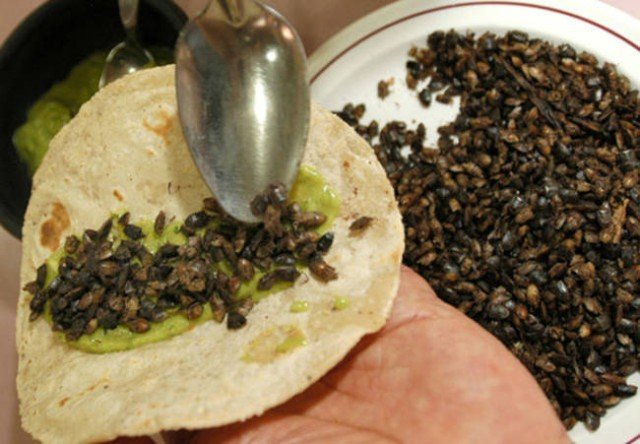 Another Mexican specialty, apparently you also have to watch what’s in your salsa around these parts. It’s not just meat and delicious vegetables. It’s actually stink bugs. Apparently, Mexican chefs feel as if this adds a bit of spice to a dish, so make sure you steer clear of this. Actually, after the maggots from earlier, can we just boycott all Mexican food? 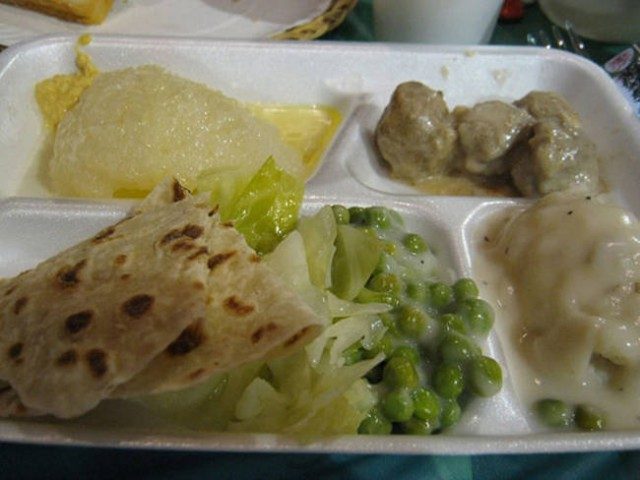 Because old, nasty fish is not disgusting enough, the wonderful people of Norway (my heritage, by the way) thought we needed something even more disgusting to eat. This is like a fish that’s been turned into a type of jello, almost. I know that’s incorrect as far as terms go, but it’s not that far off. 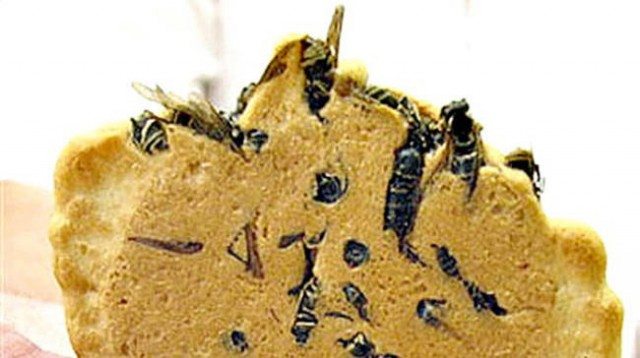 If you love Japanese food, you probably eat it. However, we are willing to bet you don’t order these when you go to a Japanese restaurant. If you accidentally order this, though, I’m going to take a wild guess and say that you sent it back because you found bugs in your food. 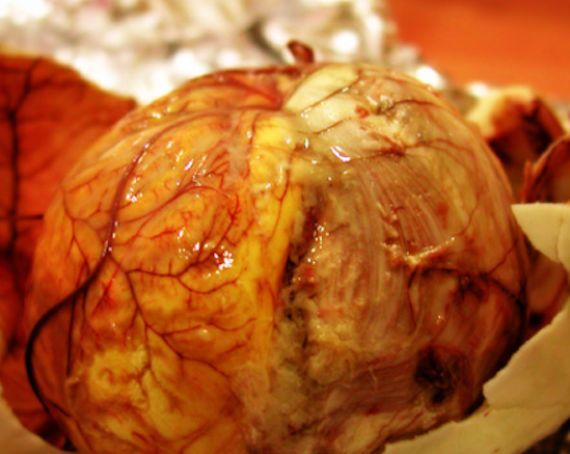 This is famous in many places across the world. It’s disgusting because, well, it’s disgusting. This food is a duck egg. The duck inside the egg is close to ready to be born. That’s when the egg is cooked with the duck still in it and turned into a meal. I mean, we all eat duck from time to time, but this is crossing a line I had no idea could even be crossed. 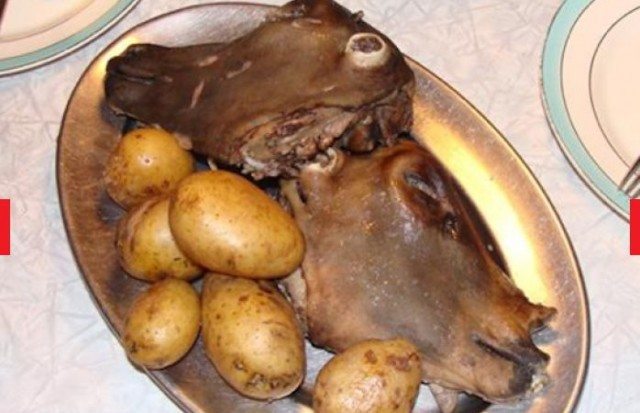 It’s the actual head of a sheep. It’s the entire head of a sheep. It’s a sheep’s head, and it’s disgusting. In Egypt and other Middle Eastern countries, however, this is a meal that is considered very delicious, and it’s a delicacy. I can safely say I know not one person that would ever eat this, and now I know where the meal ideas from “Fear Factor” come from.

All right; this is not a meal. However, it’s considered a health drink in Asian cultures. The makers of this ‘wine’ go ahead and kill baby mice that are not older than three days, they stick them in a concoction so that they can ferment for an entire year before they stick them in a jar in their very own dead baby mice moonshine type drink. It’s considered a health drink. We can only assume it’s because everyone who drinks it vomits for days afterward and their bodies are pretty cleansed by that. 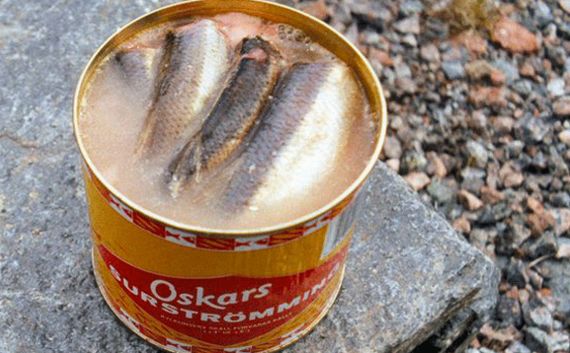 Maybe it doesn’t look that bad to you, and that’s because it just looks like a can of food. If it comes in a can, it can’t be that bad, right? I mean canned food isn’t known for being amazing, but it cannot be that disgusting. Oh, it can. This Swedish dish is actually a can filled with the bodies of tiny fish that are in the cans, just fermenting and then they are used for meals. For humans. In Sweden.

If you head into any Japanese supermarket, you’re going to find that the eyes of a tuna are actually staring back at you much like a piece of steak might be wrapped up and put into a case. It’s creepy, disgusting and something that the people of Japan really seem to enjoy. 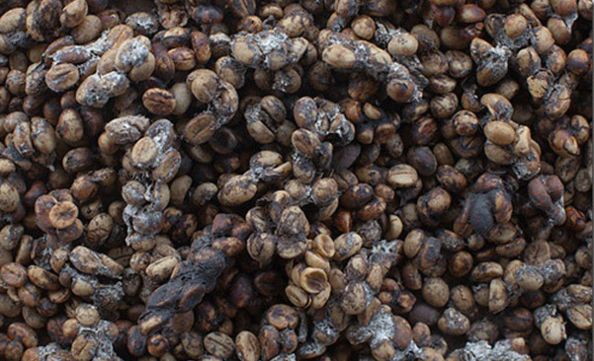 If you are anything like me, you rely a bit too much on coffee. From now on, though, I’m sticking to my Starbucks every single moment of the day. Now that I know that these are not your average coffee beans, I’m questioning every single cup of coffee I’ve ever consumed outside of the country. This is coffee, yes, but it’s coffee beans fed to an animal called a civet. When the civet relieves his bowels, the movement is collected and the beans are removed, and then used to make coffee. 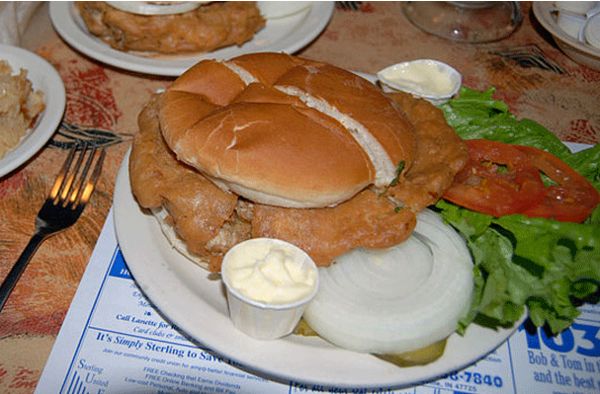 At first glance, it seems like a sandwich with a huge piece of chicken inside. In reality, it’s a cow’s brain. The entire brain of a cow is fried in all the things that make fried food taste so good and then it’s stuck in a sandwich. The worst part is that now I’ll never eat a fried anything sandwich because this is all I’ll see in my mind. It’s big in in Midwest. Of the United States; I kid you not. 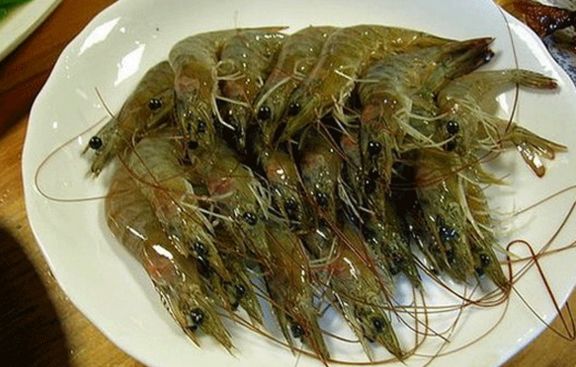 Listen, I’m a Florida girl, born and raised on the Gulf of Mexico. I’ll eat shrimp any which way. Except this way; I will not eat shrimp this way. Why? Well, they’re still alive. They’re alive and well, but they’ve been given so much alcohol that they cannot function so that they are completely still on the plate. You eat them alive and uncooked. That is disgusting. 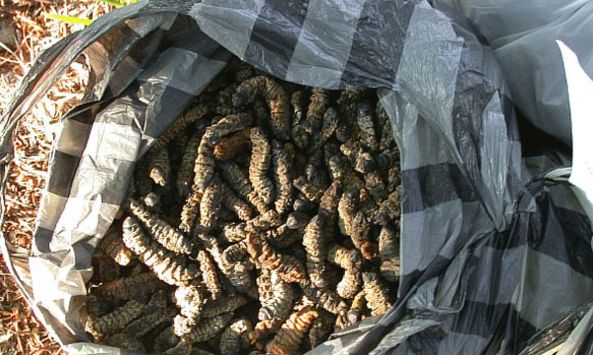 Yum, right? Um, no. It’s a bag of catepillars that are dead – just for your snacking enjoyment and pleasure. This is pretty gross, and we are not sure that we want to even go there as far as talking about it, but it’s something that people really love in Africa. It’s filled with protein and leaves them feeling quite good, apparently. 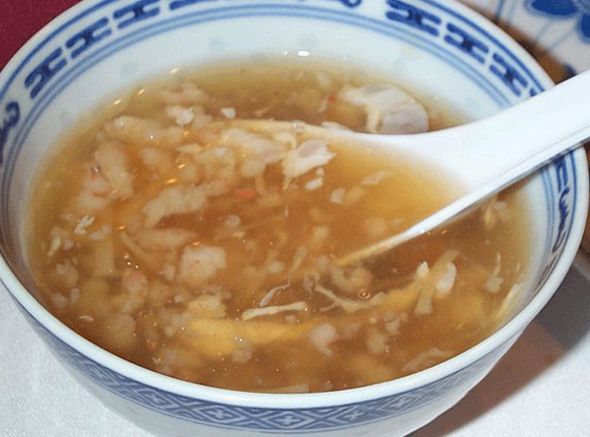 Soup? It’s not my favorite, but not because it’s disgusting. I just don’t care much for wet foods. This is a hugely expensive dish in places such as China, upwards of five figures. The dish is made of the nests of very specific birds that dwell in caves in regions not easily accessible, which is why it costs so much to order this…dish. 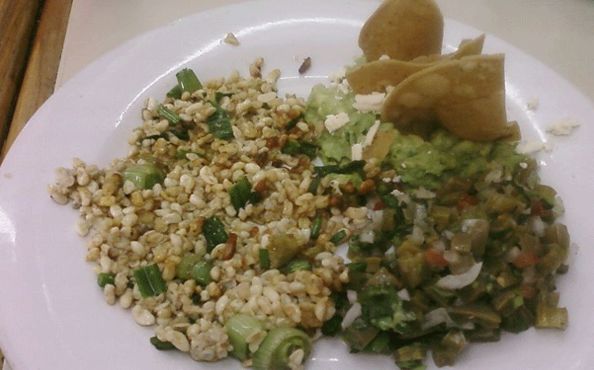 We love the idea of a vegetable and rice dish, but that’s not this. This is actually something that looks pretty good, and it’s a great reason why you should never, ever, ever, judge a book by its cover. It looks good, but it’s actually ant larvae – not rice. You’re welcome. 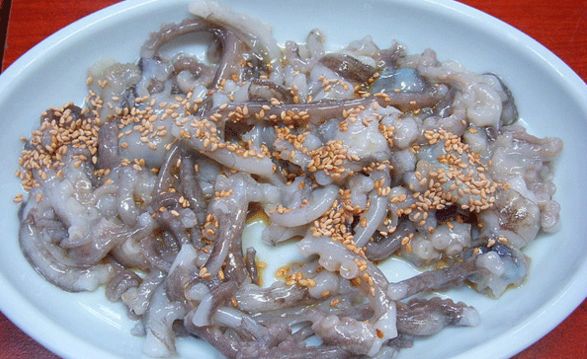 Hey, want some octopus? We all eat it on occasion, but do we watch the chef chop it up all alive and well and then put it on a plate and hand it to us, barely even dead? No, we don’t; but other people do. The good news is that the chef is going to be quite generous with the seasoning, so there you go. 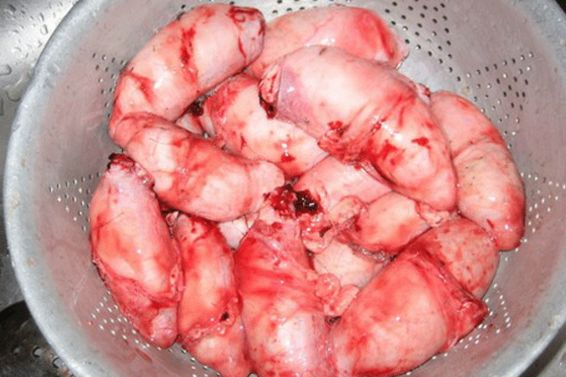 I will eat oysters on the half shell all day and night. It’s the only way that I enjoy them, but now I don’t even trust oysters. This is a dish that some people might order. It’s oysters and they’re made in the mountains from what it sounds like. Except, no; it’s actually the testicles of bulls. So there you go with the yumminess of the entire situation.